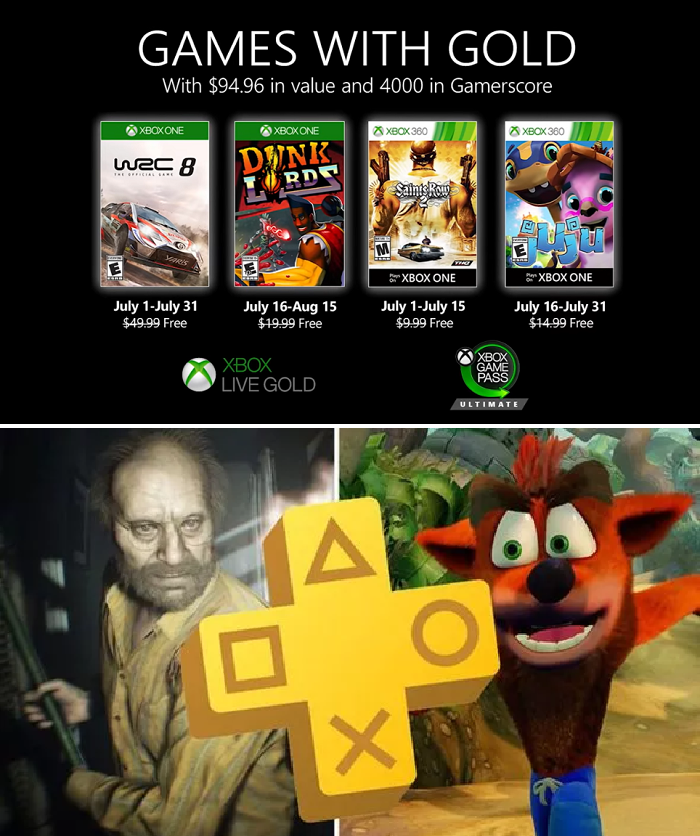 WRC 8 FIA World Rally Championship - Play the most complete and authentic WRC simulation yet. Featuring a dynamic weather system with true-to-life physics, preparation and management before each stage are vital as you compete in the sun, rain, and snow. With 50 teams, 14 rallies, and over 100 stages, WRC 8 has the deepest content ever available in an off-road racing title.

Dunk Lords - You can ball… but can you fight? Find out in this fantastic two-on-two basketball beat ‘em up. Choose from 20 of the baddest ballers around, each with special attacks and insane abilities, and battle it out on 15 unique courts. Play powered-up pickup games with four friends or guide your young star, Slice, to the very top in Story Mode. Make sure not to miss out on this new-to-Xbox title!

Saint's Row 2 - Help the 3rd Street Saints take back their city in the second entry of the explosive, over-the-top franchise, where you can explore a massive open world sandbox by sea, land, or air. Fully customize your characters and complete over 40 story missions and numerous bonus quests to seek vengeance and restore the Saints as the rightful kings of Stilwater.

Juju - Get ready to jump to a new level of adventure! Embark on a dangerous and mystical journey with the shaman panda, Juju, and his lizard sidekick, Peya, to save both his father and world from an ancient evil. Bounce, run, chant, and battle enormous bosses in this beautifully animated and enjoyable platformer

As for PS+, while Sony will likely announce their official offerings on July 1st, an interesting Reddit thread started that is attempting to predict what is planned. Some of the more fascinating games seen on this list include names like Resident Evil 7, No Man's Sky (which recently announced it will feature cross play), and Crash Bandicoot N Sane Trilogy. With Capcom just dropping a trailer for Resident Evil 8 The Village, offering users RE7 will add to more hype towards their upcoming sequel.

Barring any drastic changes to PlayStation's plans, they will be updated here on Gamefix. July's PlayStation Plus Games have been announced as NBA 2K20, Rise Of The Tomb Raider, and a bonus game in Erica.

NBA 2K20 - NBA 2K has evolved into much more than a basketball simulation. With its immersive open-world Neighborhood, NBA 2K20 is a platform for gamers and ballers to come together* and create what’s next in basketball culture. Take your skills to the next level, featuring an upgraded motion engine with signature styles, advanced shooting controls, a new dribble size-up system, refined off-ball collisions, and a new read & react defensive game.

Rise Of The Tomb Raider - In Rise of the Tomb Raider, Lara uncovers an ancient mystery that places her in the crosshairs of a ruthless organization known as Trinity. As she races to find a powerful and sought-after artifact before Trinity, the trail leads to a myth about the Lost City of Kitezh. Lara knows she must reach the Lost City and its hidden secrets before Trinity as she sets out for Siberia on a thrilling expedition.

Erica - This feature-length cinematic experience merges high-fidelity Hollywood production values with engaging, tactile gameplay. Become Erica, a brave young lady plagued with nightmares of your father’s murder. With the traumatic events that have haunted you as a child dragged back into the light of the present-day vis grisly new clues, it’s up to you to unearth the shocking truth behind this devastating tragedy. Every choice you make influences how the game develops, with multiple endings awaiting you at the finale of the emotional branching narrative.