Four games will be available for Xbox Live Gold members starting on March 1st as a part of Games With Gold.

- Batman: The Enemy Within: TellTale Games' point-n-click graphic adventure. As Batman and Bruce Wayne, navigate uneasy alliances and take on perilous deceptions in the bowels of Gotham City. The complete season is available.

- Castlevania Lords of Shadow 2: Developed by MercurySteam, this sequel escalates the fierce battle between Gabriel Belmont, now Dracula, and Satan. Travel between medieval and modern times, partake in stealth missions, and explore a contained open world battling the forces of darkness with powerful weaponry.

- Shantae Half Genie Hero: In WayForward's 2D side-scrolling adventure, a series of heists have broken out across Sequin Island, and it's up to Shantae to save the day. Shanate can use her belly dance to transform into various animals, like a monkey and an elephant and now a bat, to access areas underwater or through small spaces.

- Sonic Generations: Why not follow suit of the highly successful Sonic the Hedgehog movie by revisiting this hit from 2011? Blending the best of both worlds, Sonic Generations is a blast from the past with classic 2D Sonic style stages and the more modern 3D action adventure layout.

If you’re an Xbox Game Pass Ultimate member, you have all the benefits of Xbox Live Gold, plus over 100 high-quality console and PC games that you want to play. 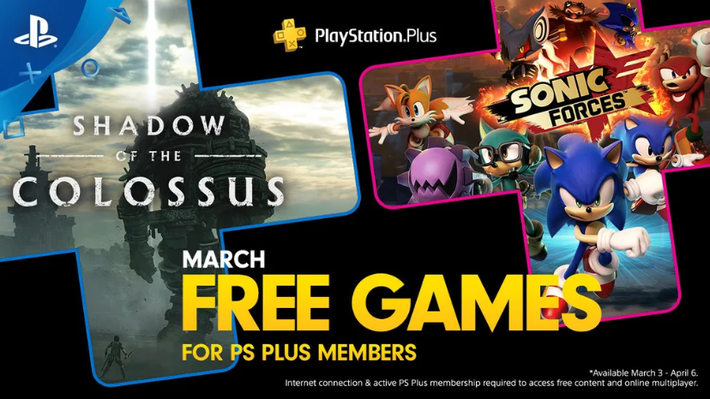 And for PlayStation Plus users, starting March 3rd, you get access to these titles.

Shadow of the Colossus - Tales speak of an ancient realm where Colossi roam the majestic landscape. Bound to the land, these creatures hold a key to a mystical power of revival — a power you must obtain to bring a loved one back to life. Shadow of the Colossus is a breathtaking journey through ancient lands to seek out gigantic beasts. Armed with only a sword and a bow, explore the spacious lands and unearth each Colossus, presenting a unique challenge to test your wits, determination, and skill.

Sonic Forces - In Sonic Forces, the evil Dr. Eggman has conquered much of the world with help from a powerful and mysterious new villain named Infinite. Now, you must assist Sonic and build an army to reclaim the world as they fight against chaos and destruction. Defeat enemies with blazing speed as Modern Sonic, catapult past perilous platforms as Classic Sonic, and create your very own Custom Hero Character equipped with a variety of powerful gadgets.

Both games will be available from March 3rd to April 6th.