No Man's Sky Introduces Crossplay Among PC, Xbox One, And PS4 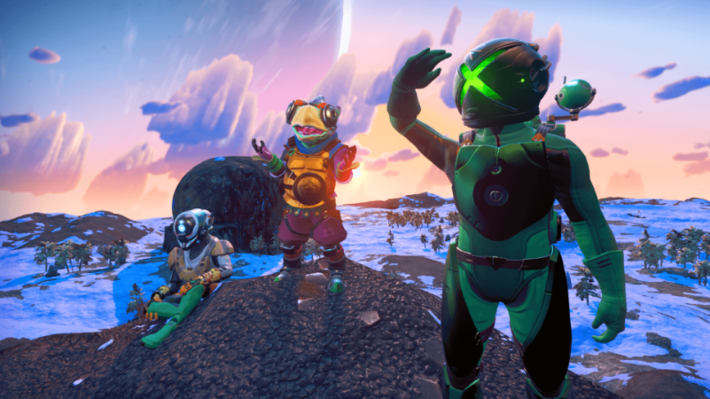 After one of the most controversial launches in recent history, No Man’s Sky has seen a resurgence after updates provided a complete overhaul to how the game functions. Throughout its release and a colossal wave of backlash and criticism, Hello Games kept their heads down and worked diligently to improve upon the initially bare explorative resource manager, which has been met with more favorable reviews.

Sean Murray and staff promised big plans for No Man's Sky and they revealed in a post on their official blog update that crossplay will be implemented on Windows 10, the PlayStation 4, and the Xbox One.

"Do you have a friend on another gaming system with whom you’ve always wanted to explore the great unknown? A legendary base you’ve seen videos of but never been able to visit? A mission that you think would be great to play with friends on other platforms?

We are excited to be able to announce that, starting tomorrow, PlayStation 4 players, Xbox One players and PC players will all be able to explore, journey, survive, build, and trade together. Excitingly, No Man’s Sky is joining what is at the moment a fairly small group of games which support cross-platform multiplayer." No Man's Sky was recently released on Xbox Game Pass and Windows 10. While it may have been an incredibly thin expedition out of the gate, the road to craft No Man’s Sky into a robust experience has been done remarkably well, and it has been done without shaping it into a live service online model. In an age where major AAA companies like Bethesda and Electronic Arts have either done clunky efforts to sustain or properly instill a player base with Fallout 76 and Anthem, respectively, the team at Hello Games have shown to try and give players of their title something worth venturing by providing regular updates over the years. Credit where credit is due, as they say. No Man’s Sky can theoretically be built upon and enjoyed for years to come.