About two weeks ago, when taking a look at Superman's first venture into video games, I had brought up Batman's success in the field. The Dark Knight has had prior releases on the Amiga,ZX Spectrum, and other computer devices. The one title that captivated many a video game fan's attention was the Sunsoft produced Batman title from the NES, which serves as a fine example of quality 8-bit game design, BGM, and a notorious challenge. 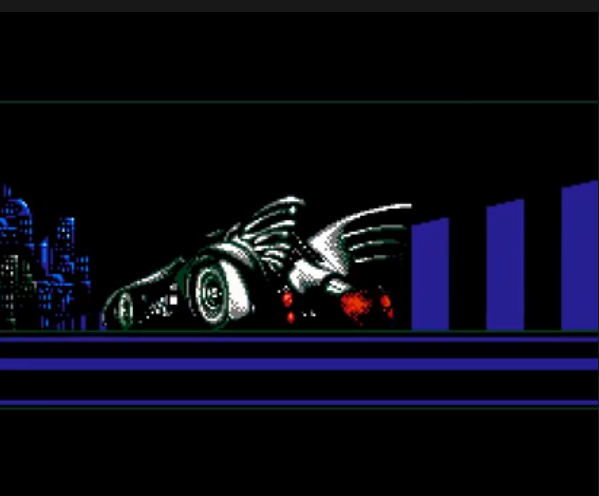 Inspired by the 1989 Tim Burton film, Batman is an intense side scrolling action game that places you in the stygian bowels of Gotham City to dispatch of the Joker and his criminal gang. Right off the bat, the game's cinematic quality is very impressive. You get the opening sequence of Batman speeding through the city and the level of detail is among the best on the console. The NES' limited color palette leaves little options, but there's room for creativity by creating a variation of rich and garish hues that compliment each other to ensure it pops. The dreary and imposing depths of Gotham City, be it the cityscape, sewers, or caves are very eye-catching. Batman's primary color is purple, so the terrain he traverses are usually in the ballpark of orange or red with a background a more lurid shade of grey, black, or green. Or in some stages where there's a heavy use of washed out colors, Batman's purple contrasts the less saturated tint. Batman never gets lost in the level design and you always know where you intend to jump and land. This give the visuals so much comic book style personality. 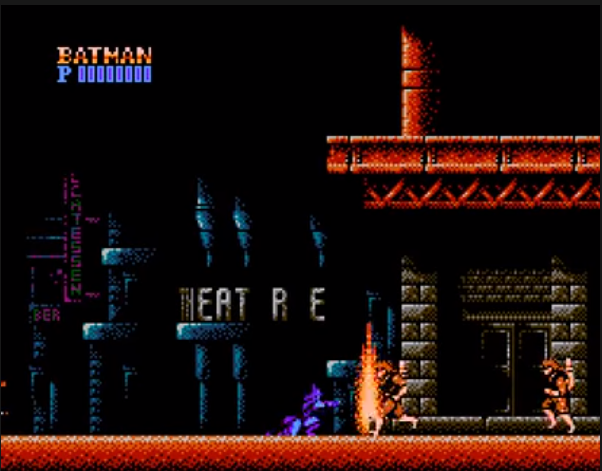 Gameplay wise, Batman is up there with being simple and effective like Mega Man or Ducktales. You have the standard punch attack and a variety of projectiles that Batman comes armed with, all you have to do is gather the ammunition to stay as armed as possible. Despite having only a punch, the hitbox on it is very generous. It freezes enemies upon impact (not quite as effective on bosses), leaving you safe. Amongst the weapons there's the Batarang, Batdisks (which split into a three-way shot), and the speargun. There are regular ammo drops, as mentioned, and it becomes dire to stay as stocked up as possible. The wall jumping in Batman functions similar to Ninja Gaiden, and in some ways, I like it better. In Ninja Gaiden, Ryu Hayabusa would stick and cling to a wall immediately on contact, even when I didn't want to. More often than not, if an airborne enemy swooped by, it's essentially giving them a free shot. Batman can also vault off in a more controlled manner, and the elevation of his leap can be guided better. This technique is key to learning how to progress through many of the various stage hazards that exist in this game, because there's a lot of them and that health bar will deplete fast. Batman also has a momentary pause prior to jumping and landing that I kind of like. I feel that makes you place more thought into when you use your jump to avoid enemies, namely the ones that move in more irregular patterns.

Speaking of the enemies, as a kid I had wondered by the primary foes weren't clowns. I had always wondered who the random ninja guy was, or the large leaping monster man. To me, they were just a random collection of generic bad guys made up to fill the game with things to kill. In the age of the internet (and more DC reading later in my teen years), I learned that DC villains like Deadshot, Maxie Zeus, and KGBeast were among the common enemies you just defeated. Things like this were certainly fun to learn. Though Maxie and Deadshot look like the same sprite, except one ha a gun. Hey, it's 8-bit.

When it comes to difficulty, Batman is relentless, but not impossible. I have yet to beat it in my life, and have only gotten to the Joker once. My NES got bumped and the game glitched. It's only five stages long, so adequate practice can pay dividends. One of the reasons the challenge can be so daunting is many enemies move very quickly and in erratic patterns. Due to how fleeting they are, trying to run past them is tricky and they do not give up pursuit. Once you get a grasp of boss patterns they can be solved, but getting to them is the real test of mettle. There's infinite continues, so there's little reason to give up. It's a matter of effectively putting together the cumulative knowledge and reflexes. 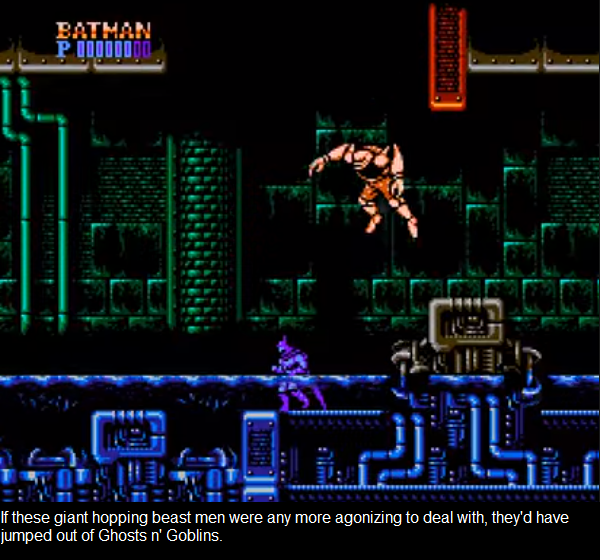 Batman on NES is 8-bit gaming goodness in almost every regard. Accommodated by Sunsoft's amazing OST (they are among the best in sound production), this game has great replay value and atmosphere that embodies the attitude of Gotham City and its adversaries. There's plenty of quality Batman video games out there that have been released of the years and one of the best superhero titles of the era, it's probably safe to say that this one ranks as a more than satisfactory offering. The difficulty can be brutal, so depending your thirst to be pushed a little by a game that demands quite a bit form you, approach expecting some growing pains. 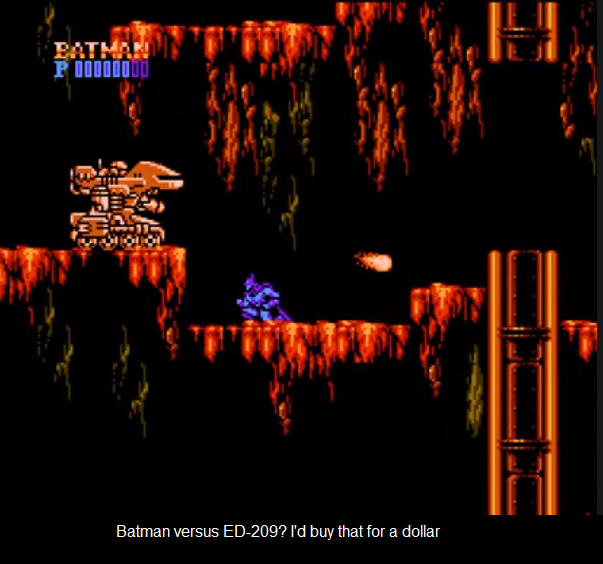