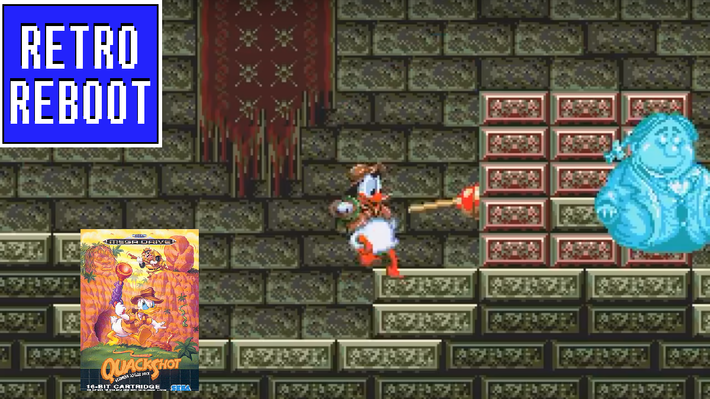 Disney’s video games have been awesome for as long as I can remember. From Chip & Dale’s Rescue Rangers, Ducktales and Darkwing Duck on the NES to Mickey Mania and Aladdin on the Sega Genesis. sandwiched in between Capcom’s memorable 8 bit titles and The Lion King was Quackshot, a game I recall buying instead of Shinobi for unknown reasons. Why did I buy the game about and adventuring Disney character instead of the sweet ass action platformer with the ninja? So later I split the difference and bought Maui Mallard on SNES years later. Compared to other Disney-based games that were available later around the era, it’s probably the least daunting in terms of challenge. Perhaps the most notable is it being the first Disney video game on a 16 bit console. When you fire it up, the open scene shows Donald traversing cautiously through a cavern, and the first time you see this as a kid in the early 90’s it kind of blows your mind. 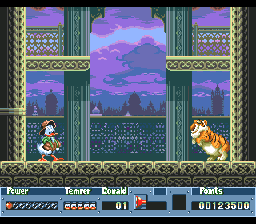 The game looks pretty good in its 16 bit glory. The cast of familiar Disney faces are easily recognizable, in-game sprites are big and crisply detailed. Each stage features several sections and no two levels look-alike, however, there isn’t really a whole lot going on in the enemy department. Boss characters aside, you mostly encounter members of Pete’s gang, turtles jogging in boxing gloves, and a small flying thing that heads towards you like a bat. Some stages offer baddies concurrent with the stage’s theme (Fire throwing scribes in Egypt, ghosts in Transylvania, snake charmer in Maharadja), but outside of that, a miniscule amount of standard thugs to battle. Visual puzzles like invisible walls are scattered about there and there, so be sure to keep a keen eye on shortcuts or potential stashes of popcorn ammunition. Combat isn't quite the name of the game with Quackshot, it places a stronger emphasis on puzzle solving and avoiding obstacles. 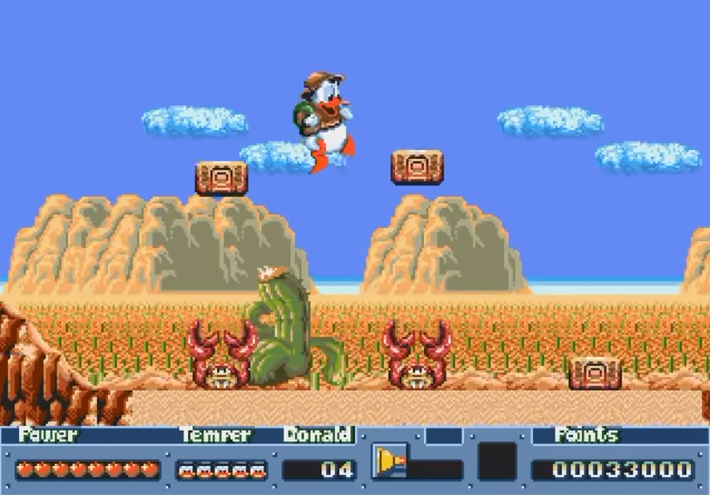 minor problem I have has to do with Donald’s size. As a much bigger sprite than say Mario or Mega Man, some of the bobby traps like harpoons and obstacles with awkward patterns seem a bit tricky to navigate around. At points in Egypt, tiny flames bounce around and above you, but due to the color scheme inside the pyramid, they can blend in with the stones or the background. it’s more of a nuisance than being difficult, but it gets a tad bit annoying, and an odd thing to complain about. Quackshot boasts some pretty smooth controls and Donald has some skill. You can dash and slide to get through obstacles, though it’s interesting that your jump doesn’t carry momentum while dashing. This makes Donald feel a touch floaty. Your primary weapon is a plunger gun, used early on to stun enemies and later to climb over tall walls and fly across areas. The plungers don’t kill enemies, but holds them in place for several seconds while you safely proceed past them. Foes are defeated by a scatter shot, powered by the popcorn ears you pick up. This ammo maxes out at about 20 something shots, but it’s pretty scarce, so best to save it for boss fights or if you find yourself in a jam. Your third choice is bubble gum, which destroys weak walls and barrels to find items as well as dispatching the opposition. At 50 shots, you would have to work to run out of it. If you do, no sweat. Just trek back to Duckburg, get to the third area, get on the zip line and Gyro Gearloose will replenish it for you at the other end! I haven’t worked that hard to get gum since I was addicted to Cinnaburst’s potentially hallucinogenic flavor crystals. (I just made a Cinnaburst reference in 2020. Jeez, I'm old...) Geared towards gamers probably younger than those who played the 8 bit Disney classics on NES, Quackshot’s difficulty is fair. It won’t overbear you or make everything a cake walk. Duckburg and Mexico are nice preliminary stages before Transylvania ups the ante with ghosts who are tricky to defeat and the game’s first boss battle against Dracula (No, really?). From there, Quackshot does get a little tougher. While foot soldiers remain the same Pete clones, elements are gradually implemented. In Maharadja’s second half, you have to enter doors in a certain order to proceed. Another tomb later on includes memorizing the combination of the SUN, MOON, and STAR. 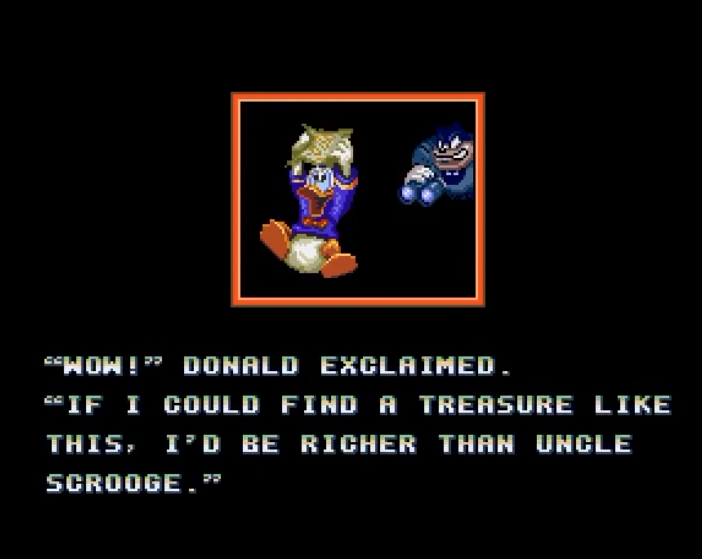 While Quackshot may not really pack the action quite like Vectorman, Comix Zone, and the Sonic series, it’s a pretty cool platformer for the Genesis. I appreciate it’s focus on puzzles, timing, and brains instead of gunning down all that stand in your way.