“This battle will make your blood boil!!”

Such a statement never rung more true when I was seven years old playing Jackal, and that pre-game text crawl displays itself. It's one of my all time favorite video games and the first I ever grew completely attached to on the NES. At the time, it was the only Konami game we owned before acquiring Life Force and Contra, and I was terrible at Metal Gear (still am, honestly). There aren’t many games I’ve played more frequently, and I’ve always wondered why there was never a real follow-up to turn this into a series. 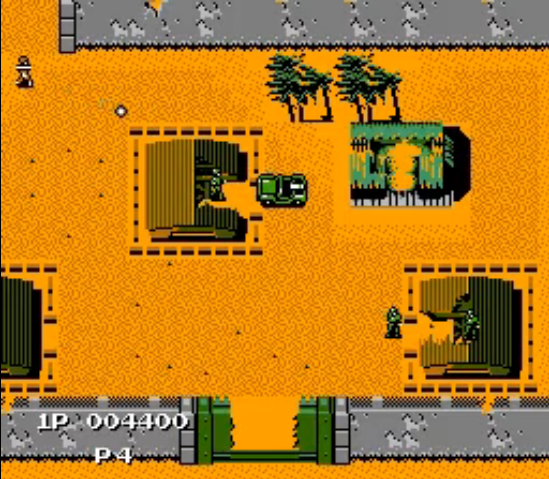 While Jackal may not have gained the momentum as the aforementioned games under the Konami umbrella, it is definitely a better game than most overhead run and gun action games like Rambo for the Sega Master System or Ikari Warriors. Both games suffered from that respawning issue where after dying, you’ll be placed behind an obstruction, unable to free yourself and too far from enemy fire to get yourself killed in order to potentially free yourself. Not to mention the spotty hit detection, resulting in a lot of cheap kills. Playing Jackal, whether it’s single player or co-op, is a very easy pick up and play title with very high replay value. 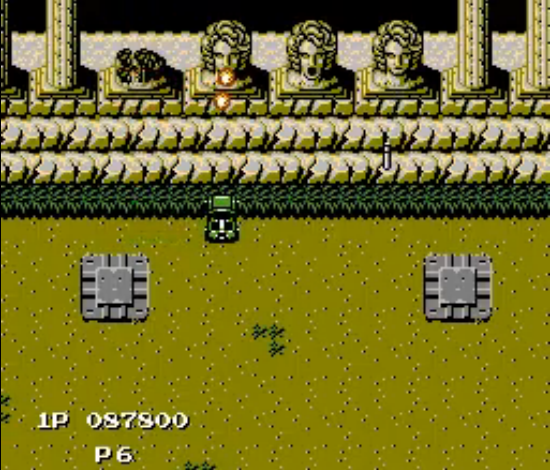 Jackal is a great-looking game. all six stages boast their own unique level design, obstacles, and at least one stage-specific enemy, not including the bosses. Rocket launching turrets disguised as Medusa busts in stage 2, heat-seeking missile subs and assault carriers in stage 3 and yellow, laser firing tanks in stage 5 (My brothers and I affectionately called these “Mustard Tanks” when we were kids because the laser stream looked like the condiment.)

The action can get pretty hectic, resulting in that slow-down, that honestly saved my life at times. Graphics and sprites can glitch, however, and you’ll get struck by enemy fire. This doesn’t happen too frequently, bullets can be dodged simple enough and I mostly blame deaths in this game on my own lack of awareness. A nice use of colors keep most standard enemies from blending into the turf or muddled pixels, save for the ones who are supposed to be hidden, of course. Projectiles are defined, simple enough to spot. Blue bullets travel at roughly your jeep speed while mango-colored bullets are much faster. 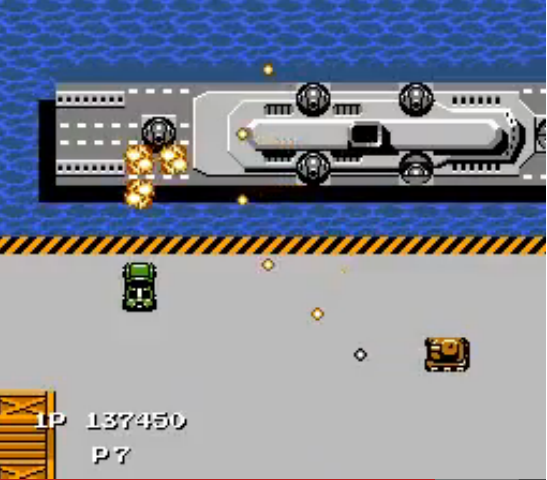 The bosses in Jackal might not be all that imposing from a visual standpoint (Stage 1 bosses are several tanks that require an extra hit to destroy. Compare that to the Fortress Wall or the Big floating brain with extend-O-arms that Contra and Life Force throw at you respectively), but they look pretty cool and they do get bigger and badder as the game progresses. Stage 3’s Assault Carrier is the first legit threat with its quick firing turrets. Easy tip: Approach the boss from the far right side to avoid dodging a huge hail of bullets at the start of the fight. 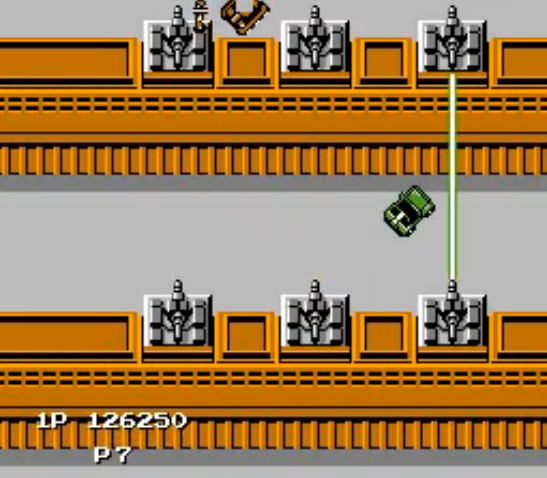 As I said earlier, this is a much more fun game to pick up and play than Ikari Warriors. The action may not be as hectic, but the controls feel much nicer and evading is so much simpler. You have two weapons, your main firepower (grenade, rockets with upgrades) and your secondary machine gun, which honestly would’ve been more useful if you could fire in the direction you were going as opposed to simply straight ahead. To power up your weapon, you have to rescue hostages or refugees from little imprisonment camps and bring them to the helipad. For every fourth guy, your main gun upgrades to 1) a basic rocket, much faster than your grenade, 2) a rocket with an extended horizontal blast radius, and 3) rocket with extended vertical blast radius and increased power and distance. Dying will result in the loss of you max power, but you can recover a max of four guys to at least salvage your rocket.

It’s a short game, encompassing roughly 15 to 20 minutes of total playtime, so it’s far from a strain. I will say, however that the final stage is a must-play. It’s the longest, most grueling stage in the game that features the largest gap from hostages to helipad and just enough soldiers for ONE full power rocket. There’s a hidden full power star icon, so if you’re playing co-op and one of you died by this point, flip a coin or arm wrestling is the easiest way to decide who gets it. Stage six also introduces the most annoying enemy in the game: ASSAULT CHOPPERS These helicopters are evil and they off-piss me!!! So, if these deadly choppers weren’t enough, the final boss a giant fortress with two laser turrets that wildly shoot about, leaving craters that you can’t pass over.

You could say that they have Uncontrolled Laser-Firing Reflex Syndrome!! (I’m funny*) I remember when I first destroyed those things and heaved a heavy sigh that my journey to defeat this game was over. Than the boss music went into a 1 second bridge and before I knew what happened, a giant tank was all over me like a giant tank that appeared out of a building and completely started owning me!!!

Up until Bugs Must Die was released on Steam last year, I will always wonder why this game never saw any newer versions or sequels to open opportunities to increase gameplay options the way Gradius has to reinvent the top-down shooter genre. Contra has tried multiple styles, including that crappy Legacy of War game for the Saturn. This is still a game I load up in my NES and play to this day and is in my top 5 favorite video games of all time. 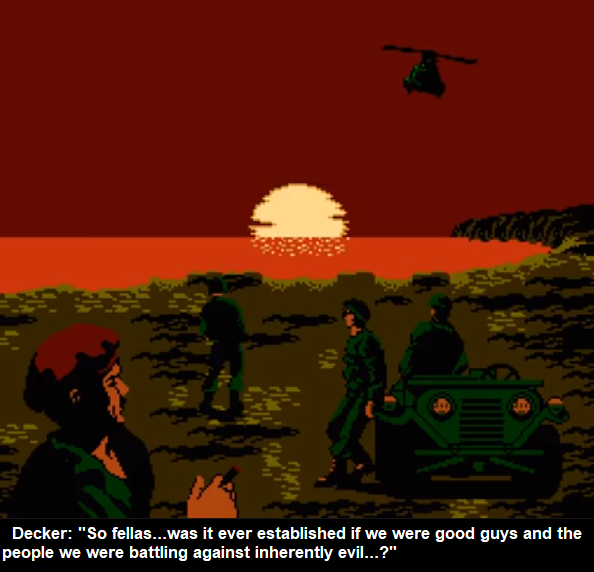