I really, really tried to go back and have a second opinion on this game, hoping that I could overlooked something. Perhaps I was just furious with the fact that I blew $49.99 on the lamest Ninja-based video game since the NES port of The Legend of Kage, But no, the second I popped this into my PlayStation, I remembered why this was one of the most overhyped, colorless action titles from an era that was still trying to figure out how to do 3D action games. 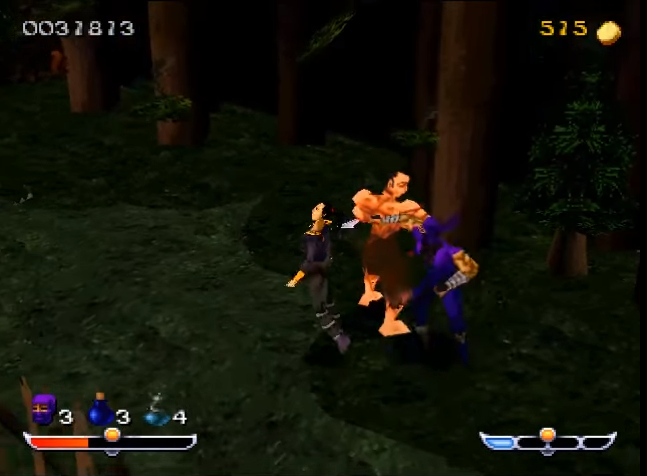 I’m always under the firm belief that you can take any scenario and instantly make it better with the inclusion of ninjas. Weddings, birthdays, the grand opening of a Chili’s Bar and Grill, presidential inaugurations, presidential kidnappings…..anything!!! Keep in mind, this only works the generic, Americanized ninja, i.e., the goofballs who run around in broad daylight with dark-colored pajamas and get their asses kicked by 3 grade schoolers in Home Alone fashion. Okay, EVERYTHING can’t be saved with ninjas. I’m getting off track here. The point of my incredibly useless, reference-filled rant there was to say that even the best treasures can be destroyed. Enter Ninja Shadow of Darkness, developed by Eidos Entertainment and Core Design in 1998, the team that brought us Tomb Raider, a once cherished game series that lost it’s identity around the time where Lara Croft was so overexposed as a sex symbol, it could no longer mask how stale the mechanics had become. 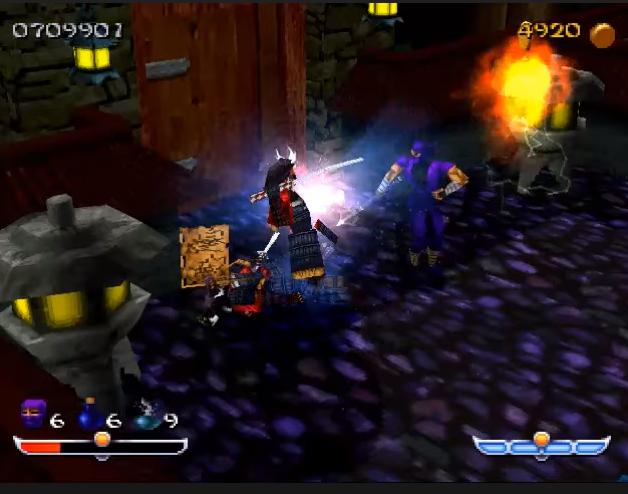 It only seemed logical that Eidos and CORE seemed set to spearhead a new generation of game developing to butt heads with Konami, Capcom, Sega, and Nintendo. The PlayStation hadn’t yet nailed that marquee developer or character to tell the world that the REAL games are here, so Eidos would’ve fit the role nicely, but with following big release, Fighting Force, an attempt to bring arcade beat’em ups to 3-D consoles, was met with lukewarm results. The next biggest project on their agenda was the much-anticipated Ninja!! I was a bit psyched about this, since I have been craving ninja action in games since Shinobi III.

I may as well start with the best aspects of the game, and while the graphics aren’t super awesome, some of the stages look kind of decent, but at a price. Most of the textures in some stages look very muddy, even putting it in your PS2 and smoothing them out only helps a little. Most stages are littered with traps that are very hard to make out (that’s why they are called “traps”, Fancy! Deedle-dee-derp!!!) until you step all over bear traps, spears, and falling debris. I’m not asking for a handout every time I play a game, but I do think it’s customary in games to present an obstacle and at the very least, give you a chance to configure a strategy on how to avoid it. 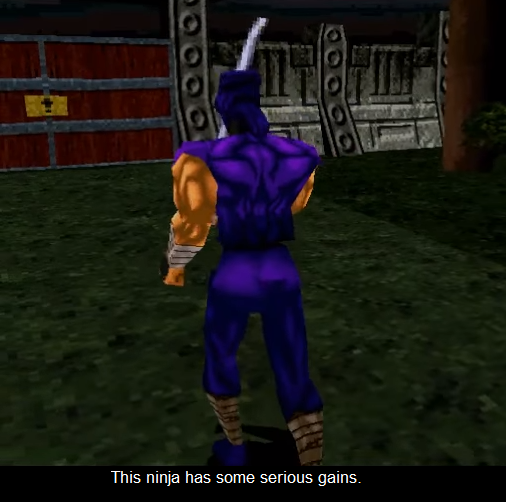 Is it me, or is this the bulkiest, most ripped ninja you’ve ever seen in your life!!? The guy looks bigger than Super Shredder! If Vince McMahon saw this guy, he’d sign him to a WWE contract and he would be beating Drew McIntyre for the title in a week! If you were a shogun and needed a stealthy, quick assassin, would you go for the ripped, 220lbs slab of man muscle who can barely throw a decent kick, or any kind of martial arts. And what the hell is wrong with his face!! Is this guy passing a stone!!? Maybe they were going for “intense”, but Ninja seems incredibly strung out. 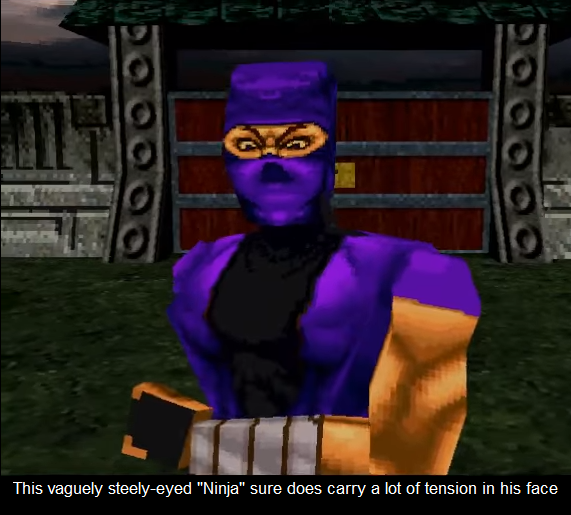 Most of the music is very well produced and varies between eerily tranquil to dark and foreboding. It’s easily the real bright spot of the game. Sound effects are pretty good as well, punches and kicks sound clear, identifying that I am hitting something, unlike Victorious Boxers and Soldiers of Fortune. Sounds DO actually alert you when a wave of baddies arrive or a trap is activated, like collapsing columns and falling rocks. I have no gripes with the sound, as it seems to be the only thing this game managed to do without screwing it up. The controls aren't the worst I've experienced, but it’s a game that just begs to be Dual Shock compatible. I say that because throughout most of the game, the camera is set at a 3/4 isometric view, it had no chance of merit on the PlayStation D pad, which usually works wonders for platformers. But NINJA‘s efforts at being a beat’em up falls a touch flat as basic maneuvering feels mildly unresponsive.   Close range combat is not your friend since the lackadaisical whiffs this game call “punches” lock you into position as you nudge forward. Actually, I don’t even know why you HAVE punches and kicks in this game, since they seem to do the same amount of damage, have no variation of attack range or speed, and you can’t jump kick!! Let me repeat that: A NINJA…….NIIIINJAAA can’t jump kick!! Sure, you can jump, and kick, at the same time, but if want a launching attack to let loose with a furious combo by staring it out with a neck kick, or a defensive strike against a larger enemy, then take that shit somewhere else!! Here in NINJA, you stumble around like a moron hoping the soldiers are dumb enough to wander within your short attack range. My strategy was to find a sword, or buy it and never use that stupid kick again. 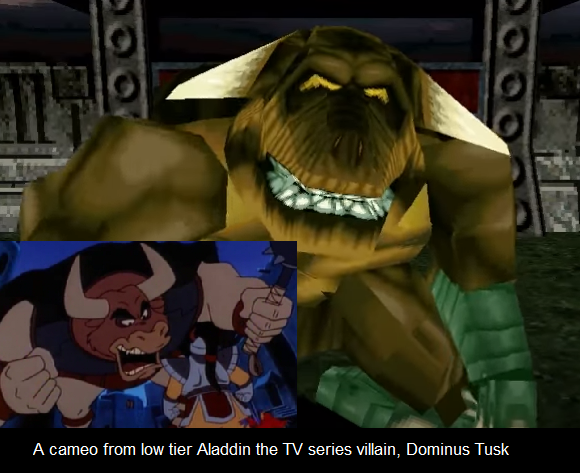 I know that 3D platformers were still in their infancy, but looking at how well Spyro blended speed and intuitiveness, this could’ve been at least decent. t’s slow, boring, has no story, and Eidos was just hoping people were foolish enough to get swept up in their own created hype and chest beating to buy anything with their label on it that “From the Makers of Tomb Raider!!” is the first thing that strikes you about its stock cover art. In the meantime, if you want to fool around with purple ninjas, trust your instincts and stick with Ryu Hayabusa.