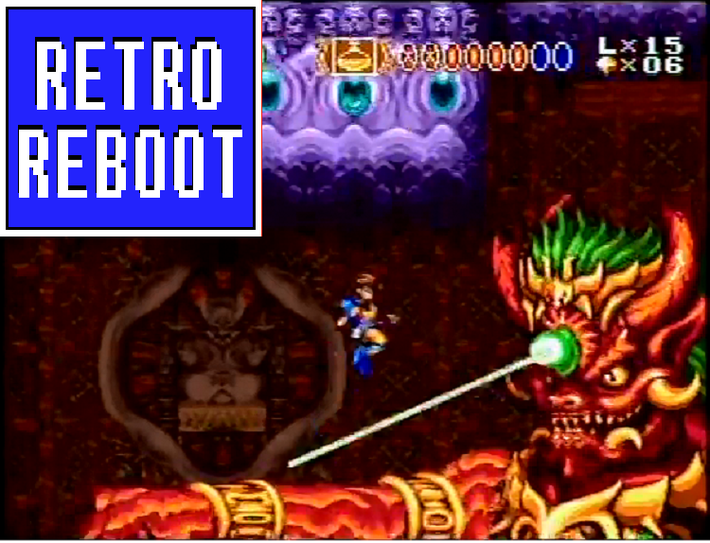 What are your favorite SNES platform games? A lot of the well-known greats are generally on everyone’s list. Super Metroid, Super Castlevania 4, Super Mario World, Mega Man X, Donkey Kong Country, Skyblazer, Earthworm Jim………Wait, what’s Skyblazer? For clarity, I didn’t discover this game until about six years ago, and I feel quite sheepish about missing out on it initially. Published by Sony Imagesoft and developed by Ukiyotei (Metal Slug, King of fighters 97), Skyblazer just flatout shines and defines the term "hidden gem". 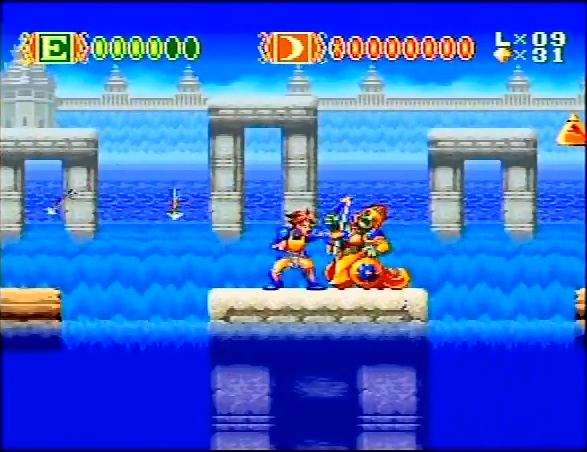 Perhaps it’s because attempting to localize this game for a mainstream American audience might proved to be a little too difficult, what with its mythological themes seemingly out of Eastern Asia that most kids in the 90’s wouldn’t understand, but it goes to show how even if a game is very good, if nothing can grab the mind of the casual gamer (by essentially judging the book by the cover), it may not achieve the success that quantifies the effort put into the final work. A real shame, because the moment I pressed start and got going, I found it hard to stop playing.

A fundamental law in good game design is having an amazing atmosphere. There’s never a point where things get boring to look at in Skyblazer. Each screen is lush and busy, but never distracting. And then there’s the monster designs. These are, by and far, some of the strangest creations I’ve seen on my SNES. Even the most practical of enemies have a distinct flair to them, seemingly popping out of a magical scroll that withheld them, but suddenly broke free.

I’m not too versed on Japanese folklore, so it’s pretty hard for me to describe them, but one boss has a round body, bat wings, an elephant trunk, and a snake head on the end of the elephant trunk. I don’t even know how to go about what you would even call that, but it looks really cool!! It’s almost like Ganondorf placed a demonic curse on a Donphan and gave it armor from Big Trouble in Little China. I love Demon’s Crest and that game has some pretty freakish-looking monsters, but nothing even close to the bizarre creatures that are throughout these stages. I mean, snake elephant trunk!! Which orifice does it eats from!?

Then there’s the game’s hero, Sky. (Blazer apparently isn’t his last name, since it’s all one word.) The game art depicts him clad in armor, but he looks like Goku drawn by Leiji Matsumodo. It’s not even subtle, same color scheme and almost the same hair. Dragonball Z was probably at the peak of popularity in Japan in 1994 around this time, so it’s bound to happen. 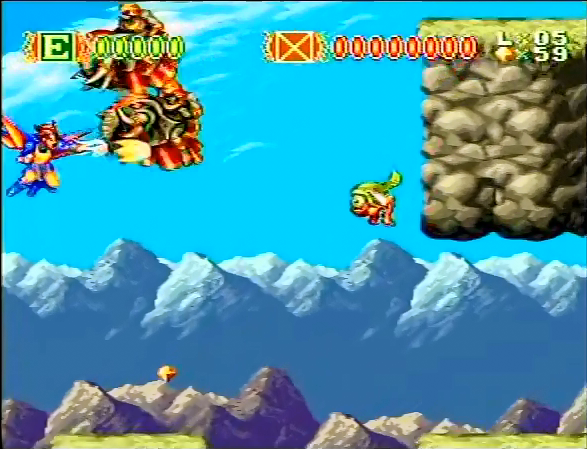 As a side-scrolling, action platformer, you have to do some pretty unique things to keep from getting left behind in the pack, and ‘Blazer doesn’t skip any details. You go mostly from left to right, laying waste to foes with you fists, or your multiple abilities you gain as you progress further that require an MP cost, measured by the orange indicator atop the screen. Sky’s punching range is very short, so best make as much use of out his skills as possible. One of the abilities Sky gets is the Comet Flash, which might be the most useful move in the game.

Even if you have the ability to heal yourself whenever you like or become invincible, this game can be pretty hard. At the halfway point, the game can jump from challenging to no more f***ing around in a snap! I wouldn’t call it one of the hardest games ever, but Skyblazer’s difficulty is very respectable. Preferably the hardest stage in the game, the Storm Fortress of Sh’Lar.

I’m not exaggerating when I say this is one of the most creative levels I’ve seen in a 16 bit game, if not the most. You traverse entirely on wind currents that will push you up, down, and all around. Death can come if you are too hasty and mistime when to move. Comet Flashing can help, but I got dragged into down currents when I tried it one too many times. 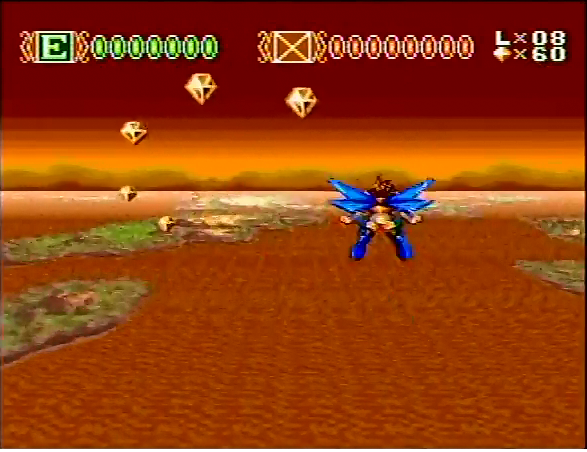 I highly recommend it. It has great music, an easy password system, the game feels great, it looks really cool, and will be great to have on your shelf if you are a retro collector. It’s too bad this didn’t get any love when it first came out. Skyblazer is 2D platform action that can hang with the top dogs of the genre with its crisp controls, great music supervision, and evocative imagination.