Are there good Superman games out there? It seems that the Man of Steel hasn't quite been as successful as other DC or Marvel heroes when it comes to having a video game worth playing. Poor Kal-El is burdened with having an offering like Superman 64 and the clunky Kotobuki produced Superman on NES in '87 to go down in infamy and little to nothing after that. However, his very first video game, Superman for the Atari 2600, wasn't too bad for its time. I mean, providing you have the instruction manual so you can have a clue as to what you needed to do, which was a common problem for me and my brothers, since our parents bought a lot of our video games used. 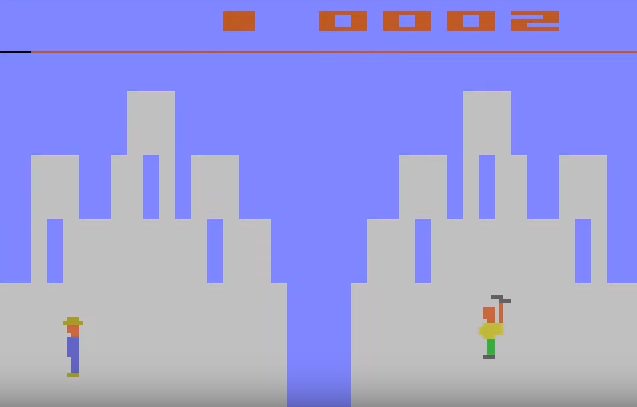 Released in 1979, Superman was designed by late software engineer John F. Dunn and has the distinction of being the first video game/movie tie-in. As the game starts, you take control of Clark Kent. As you venture to the right, the dastardly mountebank Lex Luthor blows up the bridge and his egregious goons are running amok throughout Metropolis. Clark heads to the nearest phone booth and dons his Superman attire to stop the maniacal madman from metastasizing mayhem. Okay, enough alliteration.

Superman is structured as a puzzle game. You must repair the bridge by finding pieces of it scattered throughout Metropolis an return it to the site of the explosion. There's a jail cell where Luthor's henchmen, who meander about, must be taken to in order to complete your objectives. Supes has the ability to use three of his super powers, super strength, X-ray vision, and of course flight. 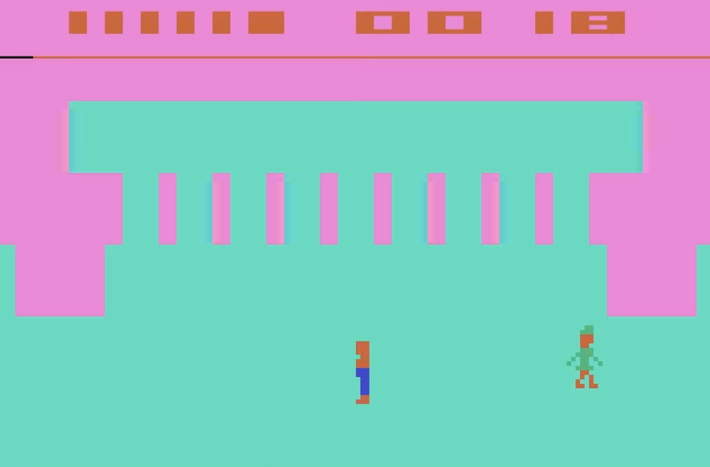 You can't die in the game, but Luthor does hinder you with kryptonite that's swern about. If you come into contact with it, Superman loses his abilities and is unable to capture criminals. The only way to fix this is by finding Lois Lane and kissing her. The kryptonite can be especially annoying, as it just pops out of the corner of the screen in the direction you happen to be traveling. There's virtually zero reaction time and it happens faster than your brain can process. Use the X-Ray vision (which cycles through various screens of Metropolis) to get a vantage point on where to find pieces of the destroyed bridge, apprehend Lex Luthor and his criminals, find the phone booth to become Clark again, and return to the Daily Planet in the shortest time possible to win. Controlling Superman can be a little awkward, especially when navigating the city. Depending on how fast you travel around determines where you pop up. For instance, if you fly too fast upward, you scale vertically through the skyscape. I'm guessing this is resembling Supes flying across the city. Slow down and proceed slow, you enter areas that are either indoors or back alleyways. It's really tricky to confirm, I vaguely got the hang of it the more I experimented, but never got it down to a science. Flying around is pretty fun, he really does take off and zip around. 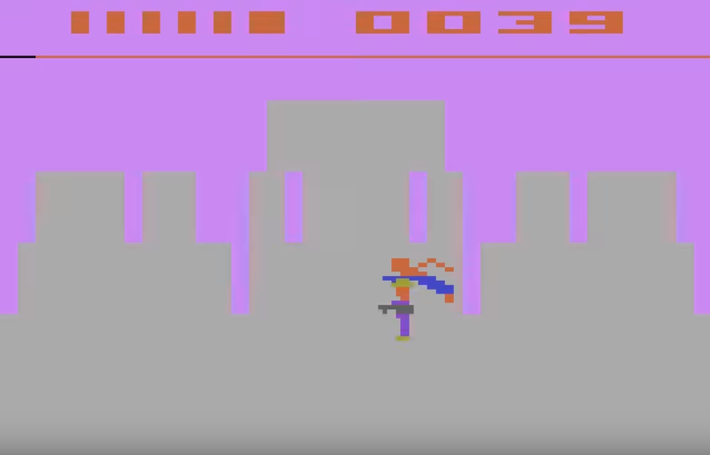 When we first played this growing up, we really didn't have a clue how this game worked and didn't care for it too much. Though we had an Atari 2600 before an NES, by the time we owned Superman, we had already played games like Batman, Bionic Commando, and Rygar. Superman was confusing and dry by comparison, though it's nowhere near as cryptic or complicated as Indiana Jones Raiders of the Lost Ark on the same console, or any of the Sword Quest games, if you ever tried to play those without the hints or comic books. It's a pretty creative quest-based game with a beat-the-clock mechanic that has some replay value to it. I am really impressed that a Superman game was developed without any fisticuffs or violence, but some fascinating thought was put into it. Playing this today may not feel too special, unless you want to fill some trivia or a collection. I can totally imagine college students having fun tinkering with this game in the early 80's. For Superman's first venture into video games, there's some merit to its craft. Seriously, stay away from that KEMCO game...