My list of games I genuinely hate is relatively small compared to, say, movies. Even when it comes to bad video games, I have a soft spot for them because they provide me with some form of amusement. But there's some things I just can't muster that kind of love for, and The Uncanny X-Men is one of the closest things I've found to sheer, unadulterated hate manifested in physical form. 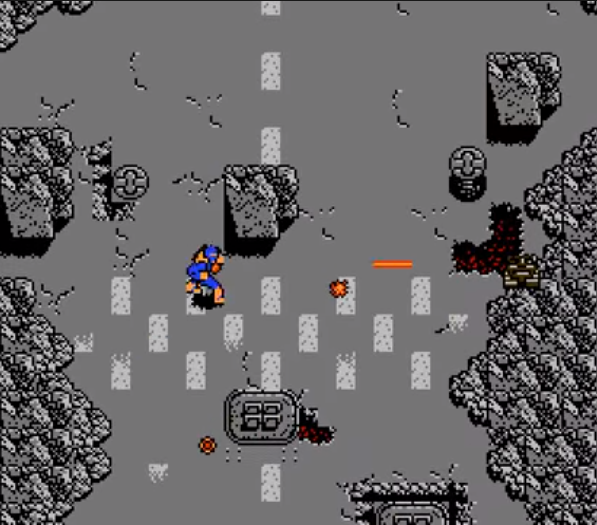 Released in 1989 and published by LJN, The Uncanny X-Men has a rather bizarre history regarding its development. It's the only title under the LJN library that outsourced its development to a third party. from sources I've checked, many gaming historians have surmised that the staff responsible is either Japanese studio Bothtec or Pixel. Bothtec produced Zipple Top, an overhead aerial-based racing shooter that shares very similar sound effects to the Uncanny X-Men. The original contractor, Roman-Tech, who has connections to Zipple Top (and other Bothtec games like Masion Ikkoku and Macross), but this has been confirmed by president Yuki Ooura that they had no hand in working on the project. This leaves speculation that it's Pixel, though nothing I've found can confirm that. I can assure you, that detour is far more interesting than this game. 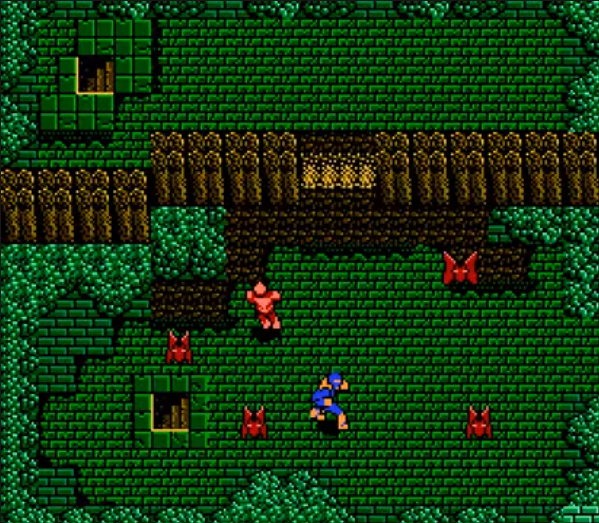 So what can I say? After giving Uncanny X-Men another go to jog the brain cells, I immediately regretted it. As far as LJN standards go, it's vaguely playable. "Vaguely playable", in this instance, meaning the game functions at a minimal level. By LJN standards, I'd say Uncanny X-Men was close to being very middle of the road, but it doesn't even hit that generous benchmark.

Visually, the game is a travesty. I don't even need to tear apart the palette swap character pixels, of which they just lazily altered the colors in mild coordination to the characters these blobs of sprites are supposed to represent. Each stage is definitely going for COLOR and variation, but the hues are just way to rich and solid, it hits the eyes wrong. The enemies are random shapes and blobs that clumsily warble towards you, it looks like a flea market of rejected Metroid monsters coming to strike you down as vengeance for being cast onto The Uncanny X-Men. The levels are sloppily designed, there's no clear visual distinguishing for what boundaries you can pass through, what stops you, and what qualifies as hazardous plain that kills you...QUICKLY. You can just walk in a direction, and suddenly the damage noise occurs. Because the mutants don't flash to indicate that you've been hit, just more 8-bit barfy noises. What you're walking over could look like just another part of the floor, but these pits are EVERYWHERE, and seemingly randomly swern about. 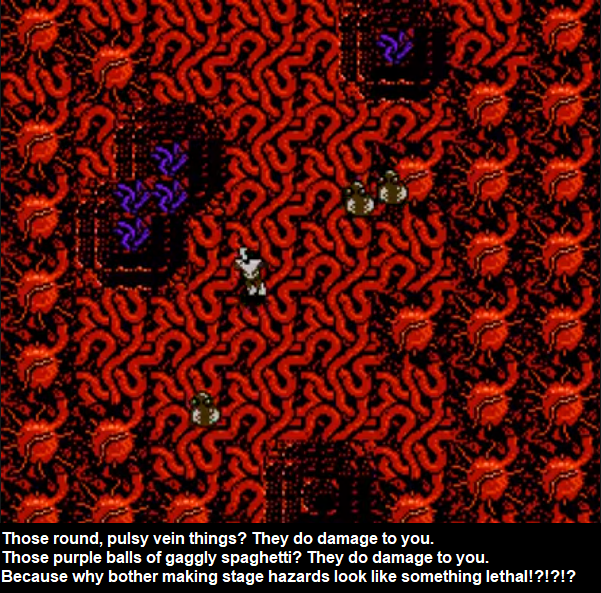 Game objectives generally include locating keys, which are in rooms and can be uncovered by defeating enemies, usually the first one you destroy in the room. Once you complete that, you have to make your way through the sealed off portion of the stage to fight the boss, which ranges from Boomerang, Juggernaut, The White Witch, Sabretooth, and Magneto. The bosses mostly meander around aimlessly and fire squiggly lines at you. They can be defeated fairly easily, as they generally wander into your path of attack. 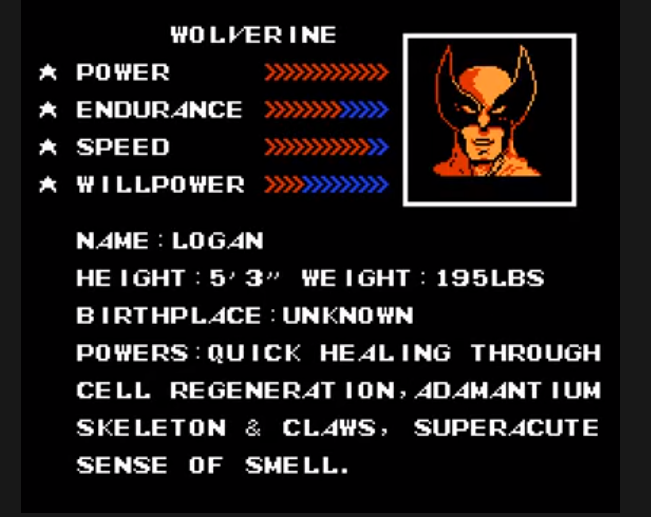 And speaking of difficulty, the general game is hard for all the wrong reasons. The controls are very stiff and a little unresponsive, making attacks feel like more of a chore than they need to be. The roster of Wolverine, Nightcrawler, Cyclops, Storm, Iceman, and Colossus have a few difference between them, like Storm and Iceman can glide. Nightcrawler can walk through walls, which helps out in certain areas that enclose on you. Wolverine and Colossus can take more of a beating than others. Cyclops, Storm, and Iceman fire projectiles, which seems more ideal than risking getting up in an enemies' face like the melee focused three counterparts. My problem is they don't have suitable life bars and take damage the same way a paper towel can withstand a riptide without playing incredibly careful. It also doesn't help that while hit stun exists after you take damage, there's no temporary invulnerability so you can get yourself out of dodge and reassess your situation. A swarm of enemies can hit you, possibly knock you into a hazardous boundary, and you're dead with little hope of saving yourself. This is why I play Colossus. He's slow, sure, but absorbs a ton of damage that ensures he can survive the bullcrap this game throws at you. Or instead of Colossus, I could just put a better game in my NES. (I was playing Batman last week. I miss last week...)

You had better hope that you have a friend who shares your love of bad video games and enjoys co-op play. The planners had the bright idea to have Player 1 mode select two X-Men and you partner would be controlled by the A.I.. Either this feature wasn't properly tested and the game was rushed through development or the purposely gave you the most incompetent ally in the history of gaming, because more often you can count, whomever your second is will be dead in mere moments. A toddler could pick up the NES controller and fare much better, I mean that literally. As a single player game, you're almost cutting the chances you have at succeeding in The Uncanny X-Men virtually in half, knowing that regardless of whom you pick, they're guaranteed to be dead. I laugh in the face of anyone who complains that Donald doesn't heal you in Kingdom Hearts, you'll be on you knees begging for that duck to fight alongside Sora after experiencing this atrocity. 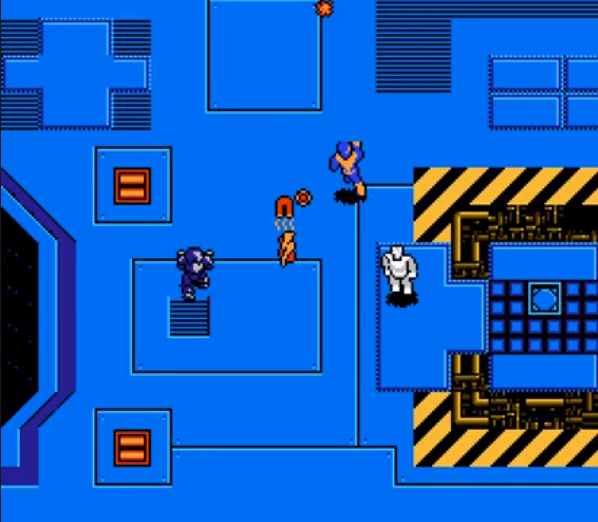 Don't bother with this game. Some titles can border on being so bad that they become good, but that's not the case here. With its comically pathetic visuals, stage layout, insipid noodling they call music, boring controls, and the rock stupid CPU teammate, you'll legit have a more enjoyable experience sitting and thinking about your favorite pet running away and never seeing them again. More fun could be had playing Overwatch at 8fps than dusting this cart off. As far as lousy NES games go, X-Men ranks as one of the most pathetic offerings on the console. It's just playable enough to frustrate you with how poor it is in every conceivable category.