Yes! I haven't been this excited about a DLC for a fighting game since the Predator in Mortal Kombat X. There have been a lot of speculation about the turtles, one character or can you choose any individual turtle. Well, Ed Boon answered that question today on his Twitter account.

How will you be able to select which Ninja Turtle you wanna use? Like this... pic.twitter.com/xWI4Y8k7P9

That's right you can choose any turtle your little heart desires! Amazing news by Mr. Boon(we're not worthy, by the way), he really is the best Twitter troll in video games by far. Anyway...

Let's talk about the voices, now, I am an original TMNT cartoon fan(junkie). I know a lot of people are hating on the voices and I say to that, the voices are about as close to the original as they could be. I'm a huge fan of each voice, they kept the core of each personality. No joke, if you were to play the voices to me individually I could name them solely based on the 1987 cartoon.

The mechanics in Netherrealm fighting games are so far advanced in my opinion, and with saying that it's going to make playing as the TMNTs will be very enjoyable(cowabunga). Not to mention the special move is spot on, Shell Shock is perfect. They used the best of using the turtles and that would be team work. Brothers don't fight alone!

Lastly I love the MK references in Netherrealm games, like for instance, this one... 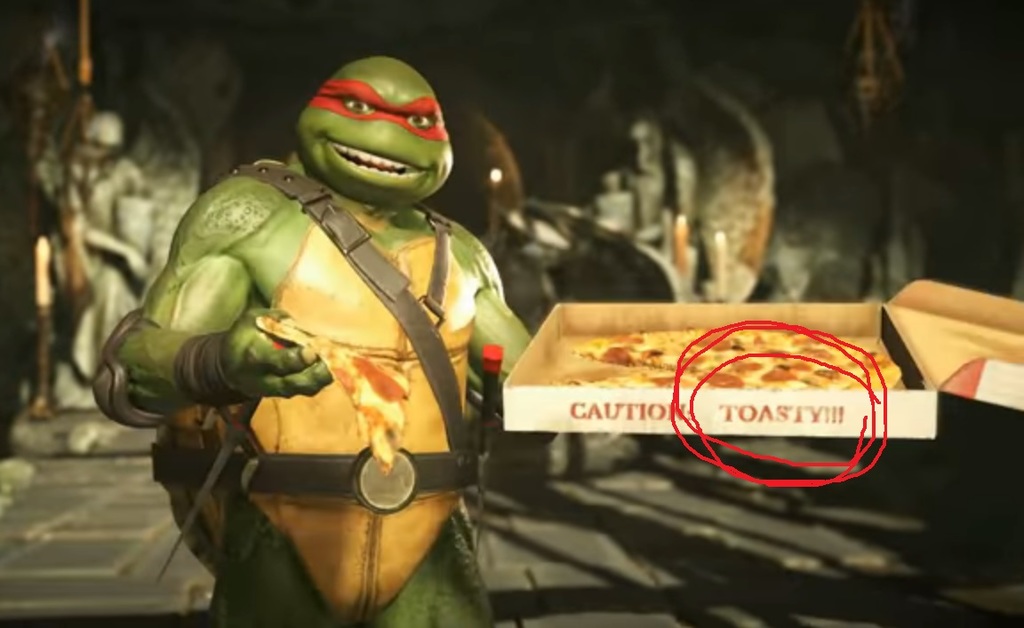 I can't friggin' wait! Also, my favorite pizza is pepperoni and mushroom too. Geez we have so many things in common(other than the turtle part)(and the ninja part)(oh never mind).