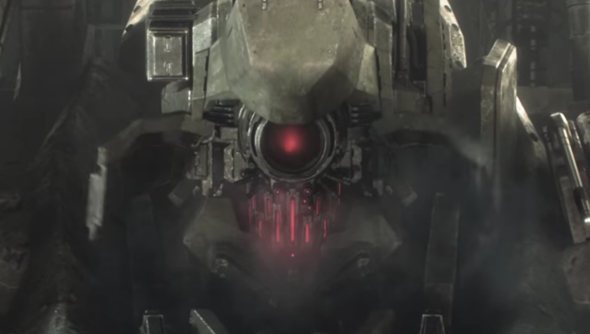 It's been a long time since the gaming world has seen an Armored Core. Its publishing rights having juggled from name to name, including 505 Games, Sega, and UbiSoft, the mech-based action franchise was where FromSoftware had honed many of their game design talents. For nearly a decade, the series has been dormant. I've been a big fan of the franchise, and have anticipated its return. There's a chance that may be happening.

According to some heavily water-marked images shared on the forum site ResetEra from user Red Licorice, it appears that a new Armored Core game may be in development, based on a text survey detailing the game. In an article posted by Gematsu, the details described are as follows,

"I've just finished doing a consumer survey about a new Armoured Core game with description, screenshots and two 30 second-ish videos of gameplay - the first a boss fight and the second more in-world gameplay, a snow area. The screenshots are unique ID watermarked, so probably not a good idea to post but I did screenshot the text description." The survey describes the project as a "third person mech action title that lets you move around on an overwhelmingly scaled map that represents a unique sci-fi world with dynamic mech action. You will face strong enemies and fierce battles both long and short range using guns and blades."

- A massive multi-layered world to explore

The Armored Core series debuted for the PlayStation in 1997, being mostly a home on Sony's platforms, culminating in 13 mainline games, 5 mobile spin-offs, and 2 console spin-offs. The plot of the games never revolved around heavy narratives, rather the player had their combat services sought after by private and corporate clients, also allowing the opportunity to compete in one-on-one duels in the Arena mode, earning you higher cash payouts and prestige as you climb the ladder. The last release in the series was 2013's Armored Core: Verdict Day for the Xbox 360 and PlayStation 3.