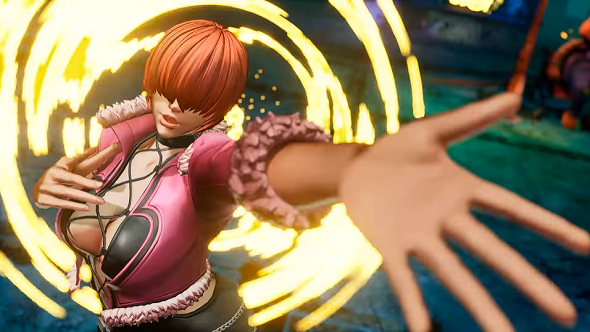 The next installment of SNK's long-running fighting game franchise, King of Fighters XV, may miss its 2021 release date due to (stop me if you heard this) complications in production due to Covid-19, but there is some positive news afoot for fans eagerly awaiting to see which platforms it will be available for upon launch. SNK Entertainment's official twitter account revealed KOF XV is going to be a multiplatform release, coming to the PlayStation 5, PlayStation 4, the Xbox Series X|S, Windows 10, the Epic Games Store, and Steam.

Not listed is the Xbox One or the Nintendo Switch. While the Switch was unlikely, even with the these details being dropped the same day Nintendo announces the new OLED model, it is a little interesting that the base Xbox One isn't an option, but with the Series S being more readily available than the X, that keeps options open for Microsoft's brand. King of Fighters XV often has trailers on Wednesdays for its roster reveals.

This is a pretty positive move for SNK, as a multiplatform release is beneficial for fighting games. As King of Fighters XIV was funded heavily by Sony, it was a PS4 exclusive and wasn't as commercially successful as SNK would've hoped. Unless you're Super Smash Bros, exclusivity is often a detriment for fighting games, an already pretty niche genre.

This news is also followed by SNK's partnership with overseas publisher, Koch Media, to continue expansion of the Japanese developer's brand in other regions. King of Fighters is beloved in its homeland, as well as South American regions, but has been rather niche in other parts of the world compared to Street Fighter or Tekken. These moves will hope to provide greater traction and buzz leading up to KOF XV's release.

King of Fighters XV is scheduled to launch the first quarter of 2022.