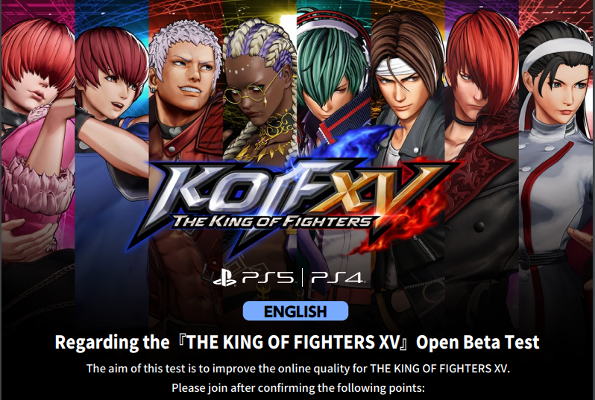 With character trailers that have been rolled out on a weekly (and sometimes biweekly) basis throughout 2021, SNK is closing in on King of Fighters XV's completion, giving fans more details about the game's build and design.

After the Chinajoy expo held back in early August, which revealed story info and the two newest characters for the latest story (the fiery Chilean Isla, who can conjure mysterious powers similar to Shun Ei, and Delores, a Malian medium who's fighting style involves controlling the earth), one of the bigger pieces of news was the announcement of rollback netcode, and SNK is looking for vital feedback with its open beta test that is taking place on PlayStation 5 and PlayStation 4, with cross-generation play available. Online selectable modes will be Room Match and Ranked Match. Offline modes available are Versus, Training, and Tutorial. As this is still an early version of the game, instability may be an issue.

Disclaimer
*Please understand that the game may not function properly during this test.
*An online connection is necessary to participate in this OBT.
*This game cannot be played outside of the testing period.
*Save data will not transfer when the official game launches.
*Testing details are subject to change at any time.

King of Fighters XV's new mechanics will be very interesting to experiment, and SNK would like to receive as much feedback to ensure the final product rolls out as robust and inviting as possible. The current roster sits at 34 known characters, with five more reveals remaining. The last character spotlight showcased Ikari Warrior soldier and former NESTs agent Whip.

King of Fighters XV will be released February 17 2022 for the PlayStation 5, PlayStation 4, Xbox Series X|S, Windows, Steam, and the Epic Games Store.