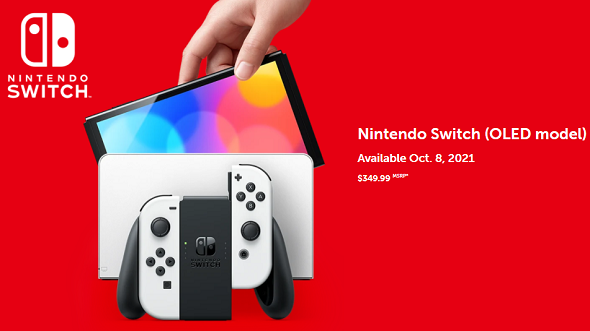 As it has been reported, rumors of an updated and improved Nintendo Switch have circulated the hybrid console since its release in 2017. Often dubbed the "Switch Pro" by pundits, many felt it's an issue that would have to be addressed, as the base Switch lacks the horsepower of the console generation for its time in the PlayStation 4 and the Xbox One. Nintendo proved it doesn't necessarily need the processing power to have a hot seller of a console, as the Switch smashed records, selling over 84.5 million consoles as of May 2021. But how will they address the dated tech powering the console in wake of the Xbox Series X and PlayStation 5?

This new version will not include any hardware performance upgrades, so the OLED Switch will not see graphical enhancements or a stronger processor to newer games. The oft speculated 4K resolution isn't happening. It also does not clarify that Nintendo made an effort to resolve the issue of Joycon drift, a problem that has plagued the console almost a month after its launch. Since the architecture of the controllers are the same, the problem still exists on the Switch Lite.

So, maybe not the Switch Pro fans and members of the media anticipated, but perhaps a worthwhile investment for consumers who may have not dabbled in the Switch hardware as of yet. Its retail price is listed at (US)$349.99 and will be available October 8 2021.