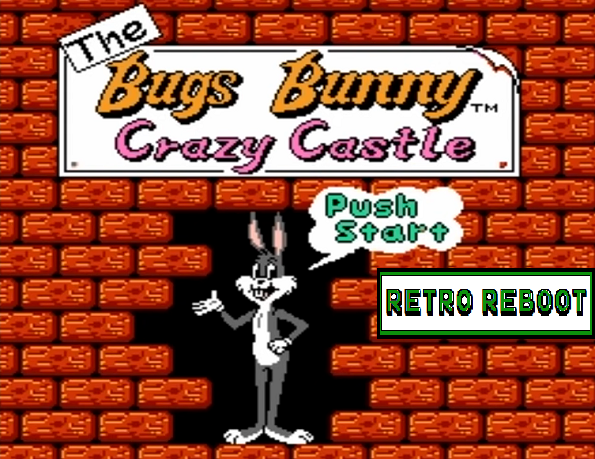 Bugs Bunny Crazy Castle is another one of those Nintendo games that ended up being one of my mom's favorites. She never really got into many video games beyond the arcade heyday of the 70's, and once the home consoles came about, there wasn't much she touched. The Looney Tunes have a storied history with video games, almost as old as the medium of gaming itself. Crazy Castle is the second Bugs solo run in the world of video games, and while it's a fairly decent title, it's fairly light on substance. 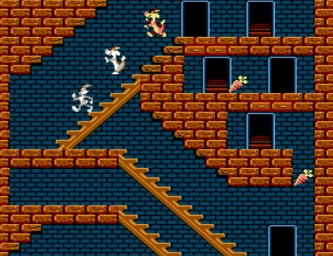 Developed by Kemco (uuggh, Superman...), Bugs Bunny Crazy Castle was released on the NES and the Game Boy in 1989. A pretty simple game, the idea is to gather all the carrots to reveal a key. This key unlocks the exit, and the stage is cleared. All this, while avoiding fellow characters from the Looney Tunes world, like Sylvester, Daffy, Yosimite Sam, and Wile E. Coyote. If you touch them just once, you die. A little bit surprising that even for the Nintendo, there isn't a more elaborate or amusing means of keeling over when Bugs buys it.

Regarding the controls and the gameplay, Crazy Castle is super self-explanatory with its objective, and has a pick-up-and-play nature that in some ways still holds up, though I question whether it will hold interest. As a puzzle platformer, it differs from Mario and Sonic. Bugs can't jump, and can only attack enemies by acquiring an item or dropping something heavy on their heads from the base of a surface. Okay, credit where it's due, THAT is vintage Looney Tunes. 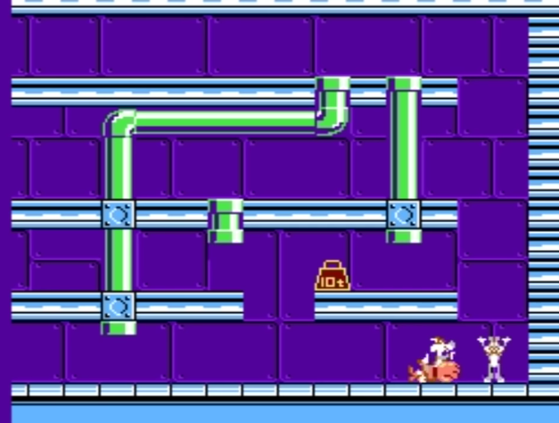 Moving Bugs around is responsive enough, he feels like he walks on a grid. The boxing glove, your only long-range horizontal attack, is launched with the mere press of a button. That's...the game, really. Do this roughly thirty times, and you've bested it. If there's anything that may provide a challenge, some of the enemies' movements seem based on three basic programming objectives;

The difficulty pretty much stays about the same, only really escalating in challenge from level design and some of the errant enemy movement. Sometimes it feels like they read your plans to drop a safe on their heads and can evade with pinpoint timing, but I think it's more than fair and places an emphasis on timing and decision making. No bosses, no real major encounters. Just some two dozen-plus puzzles.

The graphics aren't bad, Bugs Bunny Crazy Castle looks about as decent as most NES games. There's some flickering and slowdown, which is actually impressive, as this feels like a very minimalistic title. What's the deal, Kemco? Not a whole lot going on in the level department, many of the stage types repeat between a flat warehouse look, bricks & stone, and a flat industrial design with pipes. What kind of platform character uses PIPES to travel about in their games? Hehehe....like that joke hasn't been beaten into the pavement. Nothing really too special about the other Looney Tunes characters as they mill about, barely acknowledging your presence. The music is probably my favorite quality about Crazy Castle, it's a very basic chiptune, but it's everything I love about the production format. Video game music that sounds like you can hear EXACTLY how it was composed can stick with you forever. It's one of the reasons why the 8-bit style has sustained such a nostalgia factor. 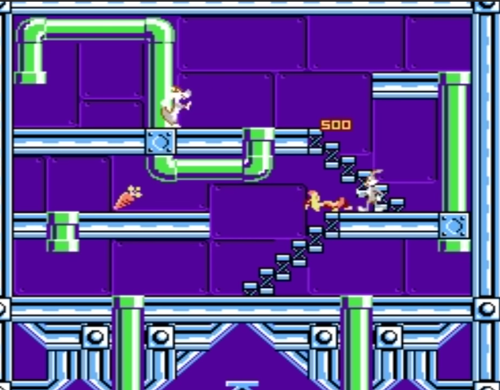 Bugs Bunny Crazy Castle has some mildly personal ties, it's one of those games we kinda played as a family. If this were an Atari 2600 or 7800, I'd say it'd be an incredible arcade-style game to enjoy at home. As a mid-generation Nintendo title, it doesn't hold much of a candle to the more demanding and interesting platform games that were bountiful on the console. It's a good deal of fun, probably has more appeal as a speedrunning revisit.