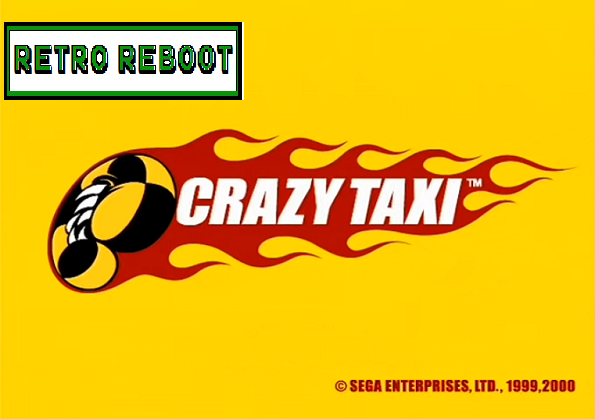 Even with their success on the Mega Drive, Sega seldom deviated from their arcade roots. The quality of console development may have taken a lot of the shine away from arcade titles, now that the quality was getti g close to, if not on par by this point. This did little to prevent a game like Crazy Taxi from becoming a massive hit. 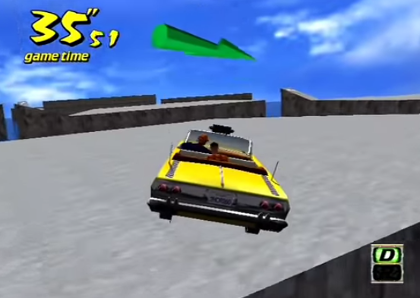 Developed by Sega's AM3 division and released in arcades, Crazy Taxi caught on very quickly. It was later ported to the Dreamcast in 2000 and was the third best-selling games on the platform. It's a score attack racer where you have to rush to customers and passengers to their destination in the shortest amount of time to maximize profits and land better tips. Higher tips can be achieved by performing stunts. It's as straightforward as a game can get, so the home port comes with a larger map, as well as mini-games in "Crazy Box" that increase in difficulty the further you progress. It's a cool way to break away from the game's core mode, in case it gets monotonous. That can happen pretty fast, too. Kenji Kanno, the game's producer, stated that he wanted to develop a game that can be enjoyed for short periods of time. Crazy Taxi achieves that, just don't expect to be glued to it. 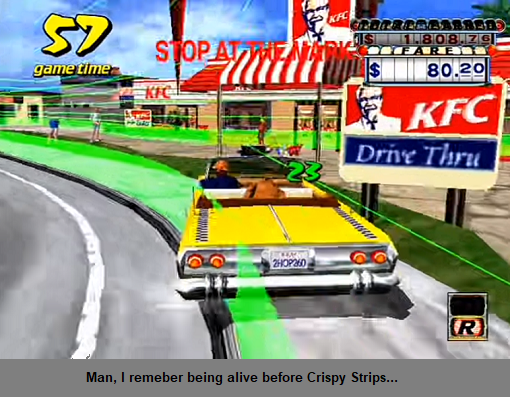 Crazy Taxi may not break the mold when it comes to graphical prowess, but it's a very colorful and eye-catching game. It moves lightning fast, and the Dreamcast experiences zero slowdown, so it's always fluid as hell. The citizens that dive out of the way and run for cover as you careen across road barricades and run lights to meet your target, the over-the-top animations on the car, it boasts a lot of character. Noteworthy are the brand names placed throughout that adds some appeal. KFC, FILA, Levi's, and Tower Records are among the various locations you can drop off patrons. Due to heavy licensing difficulties, these were later changed to generic business locations in other ports of the game. 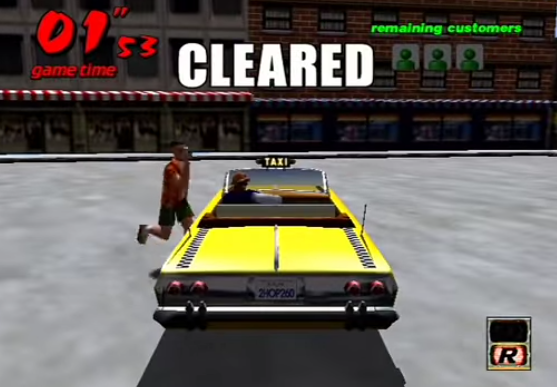 The controls are good. I mostly played using a steering wheel peripheral, but even without, Crazy Taxi is very responsive for what it is. Its build is unlike any other kind of game, making it very unique. So unique, that when Radical Entertainment's Simpsons Hit & Run was released in 2003, Sega filed a lawsuit against Electronic Arts, Radical, and Fox Interactive for ripping off its patented core gameplay. The Matter ended up being settled out of court. It's an easy game to pick up and play, while sporting a degree of nuance for high level play. "Crazy Box" becomes a true test of skill, presenting some pretty tough courses to pass, if you're good enough. I think it's better off played on a steering wheel peripheral than the whack-ass Dreamcast controller to get anything remotely substantive out of it. 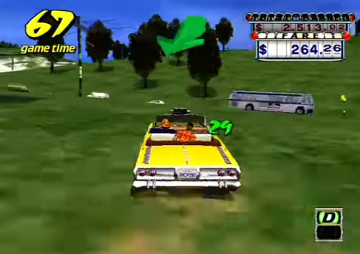 It would also be remiss to not mention Crazy Taxi's soundtrack, which is packed with tracks from Bad Religion and The Offspring (talk about your late 90's), adding to the zany atmosphere. Beyond that, Crazy Taxi is entertaining, but honestly is a very fleeting experience and there's little substance to keep you dialed in for longer than a half-hour. At the very least, its creators were very self aware of that.

There's reports that Sega is working on a "big budget" title, and a new Crazy Taxi is in the works. Unless it's core philosophy is re-imagined to meet the gameplay standards of today, that sounds like quite a task.