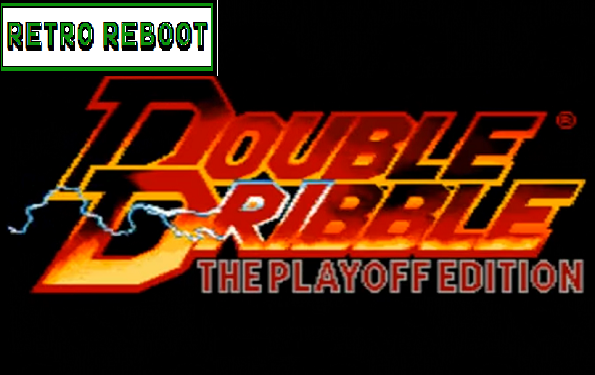 Remember Double Dribble? That NES basketball game that was just the right blend of arcade and light simulation gameplay that kept it being a fairly entertaining sports video game from Konami? Remember the sequel for the Sega Genesis that tried to up the ante with even more grandiose presentation and not much else? No? Well, you're in the majority to thankfully never experience a complete one of the lamest basketball games of the era. 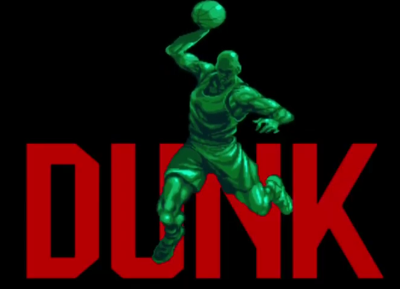 Produced and developed by Konami, Double Dribble Playoff Edition (known as Haipā Danku Za Pureiofu Edishon, or simply HyperDunk when the game was ported in Europe, and frankly a better name) was released in 1994 exclusively for the Sega Genesis. That last sentence sums up two of several matters that had this game dead on arrival. It's coming out for the Genesis, which was dying a slow death here in '94, suffering wounds from a console war that was pretty much over. So not only does this basketball game have to vie for attention on a platform with a fading audience, but also has the misfortune of having no NBA license to back it for advertising, which is ALSO about to get demolished by Electronic Arts' upcoming reformatting of their line of basketball with the newly christened NBA Live. Then again, Konami would rectify that with their development of NBA Give 'N Go a year later, exclusively for the SNES, which was very middling. Many sports games played much better on the Genesis. 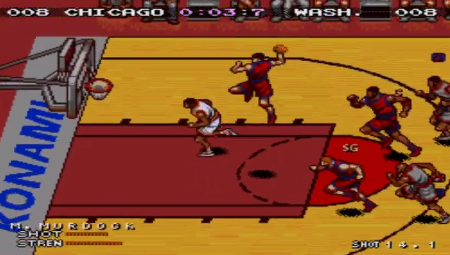 The Playoff Edition does aim to be a more substantial and thorough simulation style b-ball game. As mentioned, it doesn't have official National Basketball Association teams, so it provides vague-ish resemblances of NBA teams. Knockoffs are fine, but I think this game should've amped up the campiness to give it more identity. It doesn't have to go as far as NBA Jam, but something like having fictional signature stars of each team having pregame trash talk. These teams have rosters, but it's devoid of personality. 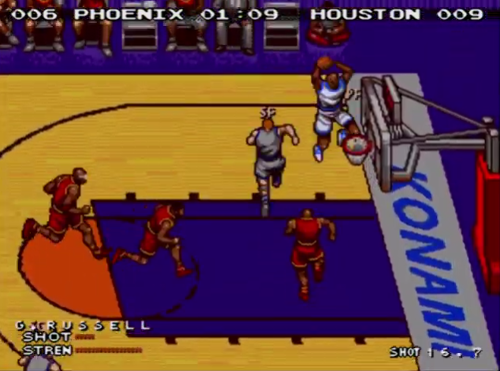 The addition of playoffs is a way to provide other means of replay value, kind of like those Bulls vs Blazers games (sports games before franchise modes, it was a fascinating time, who'd have thought it'd get deeper than this), it would have helped if these teams played a little different from each other. The players have mild visible traits, and some shoot better and are faster, that's about it. This game is capable of supporting EIGHT human players through use of the Sega Genesis Team Player, the multi-tap device that I have never seen throughout my entire youth. We had a multi-tap for the Super Nintendo, because we had aggressive bouts of Super BomberMan in our home. I'm trying to imagine someone not only owning Double Dribble: The Playoff Edition, but a device specifically to ask seven other people of they want to come over to play it. 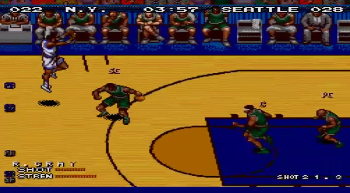 The game plays pretty flat and very confusing. My immediate problem is the damn camera is WAY too close to the action to the point of being nauseating. It's made even worse that instead of orienting the view to center on the ball carrier in the middle of the screen until you reach the offensive side of the court. Get ready for the incredibly stubborn and nearly unfair CPU to ambush and knock you around at the half court line until you drop the ball. Even if you play with simulation rules, it still feels like street rules. Players just run around, you can't control the guy who's receiving the in-bound pass. It's also missing the thunderous dunk animation cut sequences, which sometimes you missed if it was properly contested. Dunks not only never miss or feel like they can't be blocked, but the animations are very static and ordinary.

Despite a three (or six) button controller, the only functions are shooting and passing on offense, and stealing and blocking on defense. This is a case where keeping the simple control scheme from the 8-bit game does no favors, especially for a basketball game that can't make up its mind with what it wants to be. It feels impossible to play defense, offensive rebounding is astoundingly inconsistent, and the substitutions feel incredibly pointless. 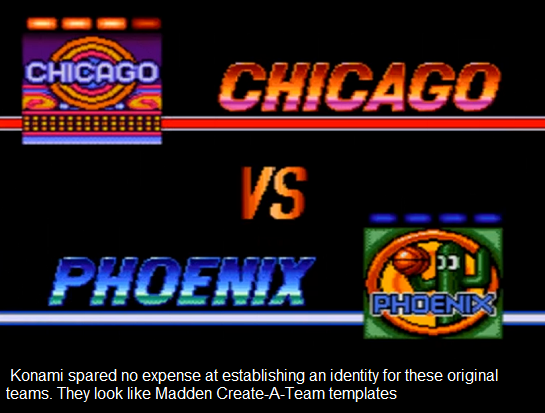 You will get practically nothing out of playing this watery sequel. The original Double Dribble is so much more fun to indulge in because it's simplistic and straightforward, probably something that can be played with some buds after a couple of beers. Summer nights at my grandma's house, Double Dribble was a FUN game we would play for hours. This "bigger" sequel is another follow-up that frankly gets its 16-bit ass handed to it by Nintendo's grey box, showing that sporting better graphics and expansive modes means very little if the core gameplay isn't entertaining. Double Dribble's Playoff Edition looks like good window dressing, but those chachkies are fake.