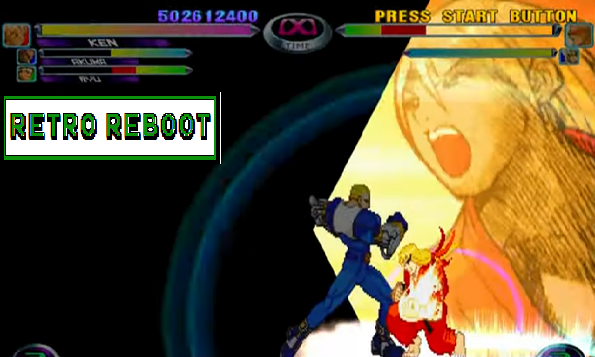 I have talked in the past about how the era of 2D sprite-based fighters truly defined an era and went out with a bang with titles like Capcom vs SNK 2 (more on that at some point in the future), so I'll be concise with a lot of the trivia. The first Marvel vs Capcom was a smash hit that received great fanfare. I've reviewed it here, noting its addictive gameplay, great music, and wild flair. New Age of Heroes was a shmorgishborg that remains culturally relevant to the fighting game community today. 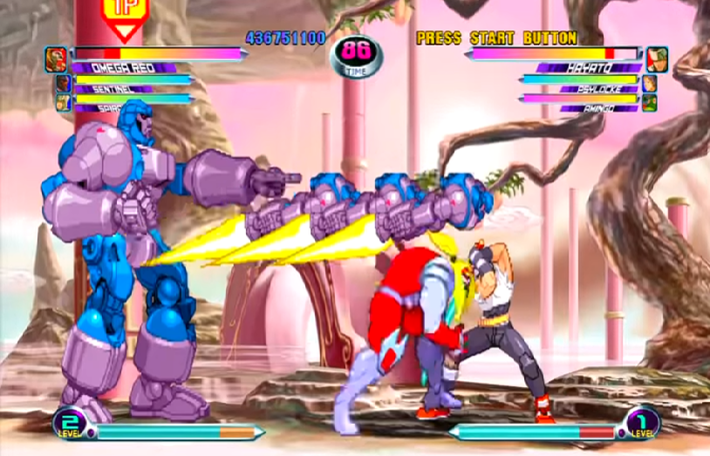 Capcom decided to forego their CP II and III hardware for development of this sequel and opted for Sega's NAOMI technology instead. This is probably due to the computer animated backgrounds likely to be more taxing on the former's programming. In arcades, the roster was time-released, so the base selection of fighters ballooned from 24, eventually ballooning to over 50 characters. This broke the collective minds of the people who played it. Approaching the late 90's, fighting game rosters were becoming more diverse, but the mentality of "more is better" was always a satisfying compliment to the dish. Many of the sprites used for MvC2 were lifted from previous Capcom games dating back to X-Men: Children of the Atom and through the Street Fighter Zero and Darkstalkers fighters. The only characters built from the ground up for Marvel vs Capcom 2 were Cable, Ruby Heart, Hayato (Plasma Sword), Amingo, Sonson, Marrow, Jill Valentine, Tron Bonne, and her helper robot Kobun (Servbot). 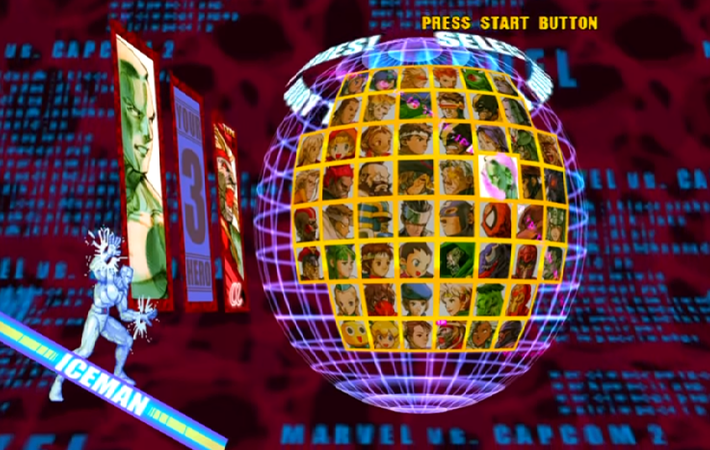 A beefy roster indeed, and the balance is completely out of whack. Nobody cared about this, though, as MvC2's insane gameplay was incredibly stimulating, even if it wasn't as refined as Capcom Vs SNK 2 or SFIII Third Strike. The simple control scheme of its predecessor remains, but now it's 3v3 and assists come courtesy of your partners, rather than the random draw. these Assists come in three different types with various properties that aid in extending combos or boosting defensive play. Some can even heal. there's a lot of different ways to plan one's strategy. 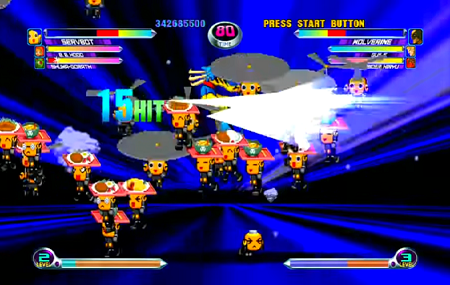 I do have some issues with MvC2, most notably how the reduction of frame animation actually affects how some characters play. Venom, who was incredibly powerful in Clash of Superheroes, is crippled by the efficacy of his standing Hard Punch. Once a quick combo finisher, the move is now incredibly slow and very easy to punish.

While it might be minute, and I understand this game is so jam packed with stuff that some liberties are taken with other areas, the 3D animated backgrounds and stages aren't my cup of tea. It's boring to look at after a while, as there aren't really a lot of levels to choose from, kinda feels like weighing Street Fighter III: Double Impact next to Third Strike; yeah, the latter is the more viable and complete game, but the stages are BORING and feel like a significant step backwards. 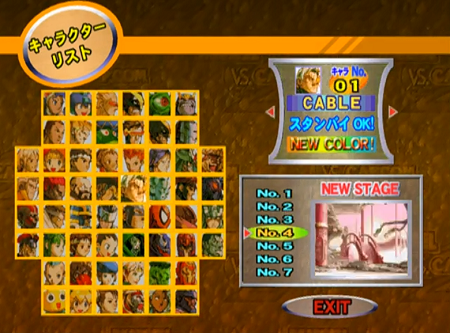 For the home ports, the PS2 version got the short end of the stick when it came to unlocking the roster. Yeah, you still spammed battling through Arcade Mode and dealing with Abyss over and over on the Dreamcast version to "level up", but the PlayStation 2 has this Shop feature that just feels like a slog. Buying a new character/color/stage increases the cost of the item, and it has a cap of 9999, regardless of your earnings (if the Xbox version differs, feel free to let me know). This eventually becomes a total slog to earn enough points, as you'll likely be able to only afford ONE color or character each. Points are awarded through Survival, Vs, Training, and Time Attack, providing you pump that many hours into it. Not impossible, but it becomes a very repetitive grind. Just like Tekken Tag Tournament, I'd unlock all the material again and again, if the original data ever got corrupted or lost, so I remain an easy mark. 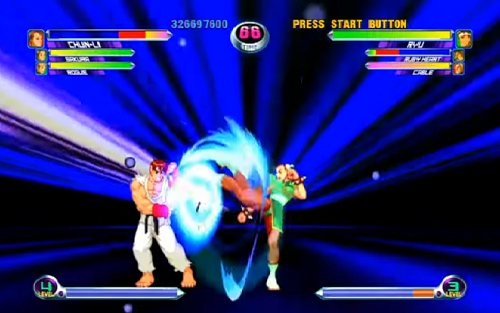 Marvel vs Capcom 2 may be a giant, barely polished fighter that makes most MUGENs seem viable and more technically by comparison, but that doesn't mean it isn't hella fun to play after all these years. One could say it's responsible for the FGC growing as much as it did during its blossoming days in the early and mid 2000's. Fervent campaigns like #FreeMVC2 launched by Maximillian Dood aimed to make strong attempts to have the game brought back to PSN and Xbox Live to breathe new life into it. Tournaments are still held online through Fightcade for it, as well as live events at EVO and Combo Breaker. Love for the game never dies down, I know I'm still a (vaguely) regular player of it, and it's earned that reputation.

"When's Mahvel?". I got my setup, who wants the hands? I'm an amazingly average player.