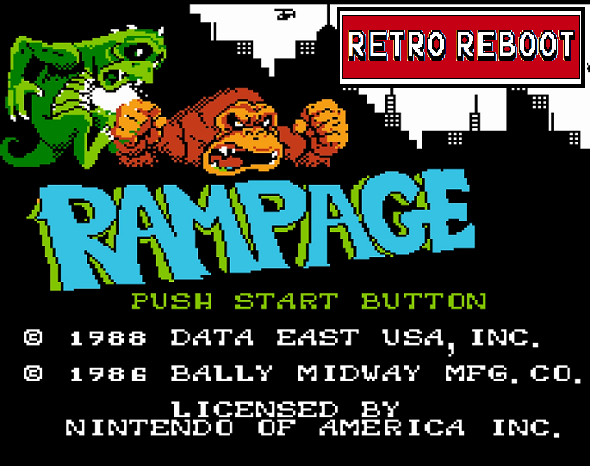 I've talked about it before on here with Primal Rage, give me some giant monster Kaiju mayhem in my video games, and I'm likely down for it. And one of the granddaddies of that is Bally Midway's Rampage. Oddly, I didn't play this one in the arcades until way later in life and grew up with the NES version, so when I read that there was a third character, I just assumed it was a Game Genie code. 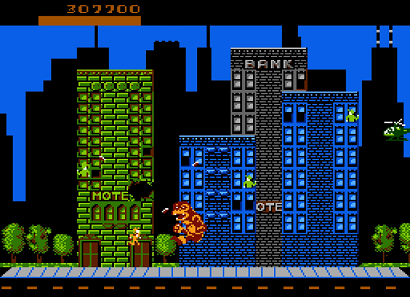 Developed the aforementioned Bally Midway and published by Data East (how have I not talked about them more?), Rampage saw its way to arcades in 1986. Many ports were developed and made their way to home computers like the Amstrad CPC, ZX Spectrum, Commodore 64, and IBM PC, as well as almost every home console at the time. It was also Bally Midway's last successful games under the "Bally Midway" title.

George and Lizzie are two humans who were mutated by experimental accidents resulting in them transforming into a giant King Kong-like ape and a lizard creature that resembles Ymir from the 1957 sci-fi monster movie 20 Million Miles to Earth. The common misconception is Lizzie is supposed to be based on Godzilla, but I never thought the proportions were correct. 'Zilla's way dumpier. 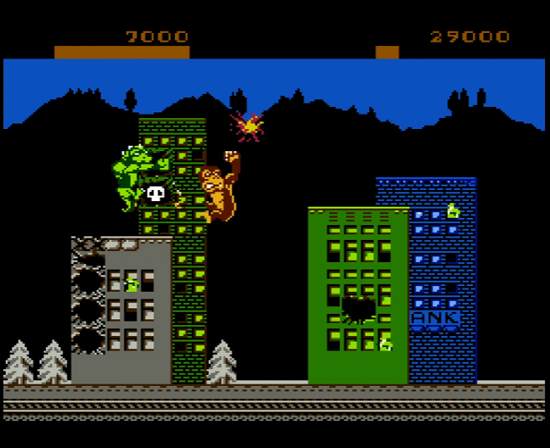 Take control of George or Lizzie and tear through the United States while trying to survive retaliation and defense of the military. I've always enjoyed the graphics, the NES does a commendable job of capturing some of the comedy mayhem of the arcade. As the background is primarily black silhouettes of regional landscapes varying in the distance, the sprites are outlined with lighter coloring. To me, this makes the best of the Nintendo's limited color palette. 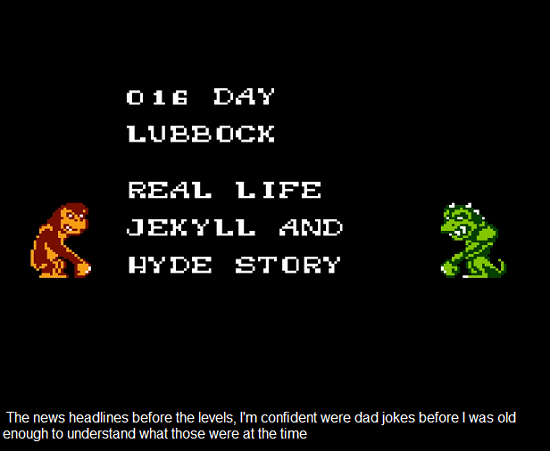 There's only a handful of buildings to smash through, like the same bank over and over. But I'm going to score the Nintendo port over the arcade's flat grey and green structures. There may be significantly less detail on George and Lizzie and the visual effects are greatly reduced, but I find the NES version just a little neater to look at. I get a kick out of the tiny people in the shower who spray you in the face, they're probably three pixels tall. Another thing I enjoy about the NES version are some of the headers you get before each stage. I don't know if they're supposed to be gags, but I was always amused by them. Most of these have to be inside jokes from the production crew and the team in the office. It's not uncommon for the Midway team to litter their games with gags to make themselves laugh. 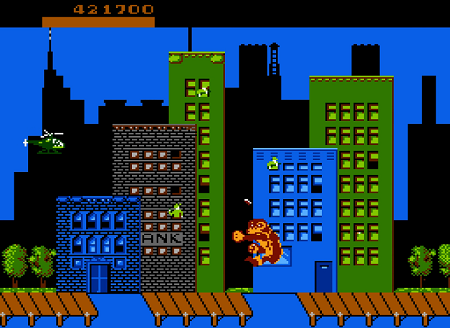 The controls in Rampage aren't completely terrible. You can jump and cling to buildings, punch in four different directions, and while it's responsive enough, there's something a little imprecise about how it feels and some input delay in the objects you hit. Punching overhead is a little off-center, and attacking or grabbing items off the ground is a touch awkward. You can incur fall damage if you teeter off a building that's demolished or if you're hit by bombs and rockets. Eating people replenishes health, as well as the food you find in holes. Some items you grab will momentarily stun you or poison you, which disrupts your "smash everything" strategy. 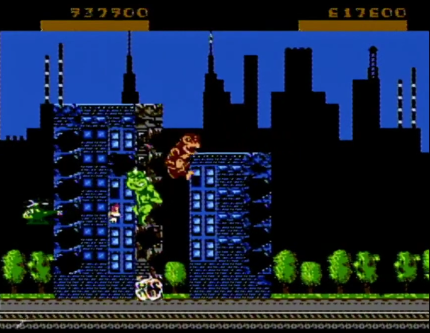 The armies get bigger, more firepower is thrown at you, and more things are trying to blow you up. In two-player mode, it feels like a co-op/Vs, you CAN work together, or race to get a higher score. Bopping each other doesn't affect your life bar, but when you turn back human, you can be eaten, so if you want to get back at anyone who stole your cards in the Vs portions of Super Mario Bros. 3, Rampage is the ultimate opportunity to be a gigantic dick right back.

Rampage is fun, but because there's a TON of levels as you smash through the entire United States, it does get really tedious, even as a co-op. You can only smash the same cities over and over before it begins to wane in interest. You also have infinite lives, so there's nothing at stake and little emphasis to try or apply any skill and avoid damage when you can simply respawn. I do give NES Rampage a lot for being as entertaining as it is, it was a decent way to pass the time.