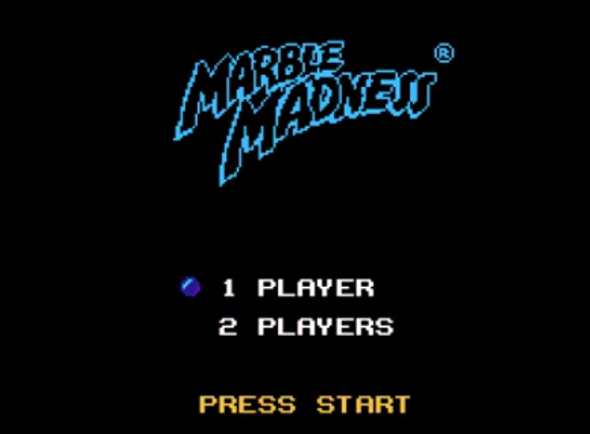 During the golden years of coin-op cabinet game development, Marble Madness was one hell of an interesting arcade title, there wasn't much that looked like it at the time. I remember always wanting to try it out for years and eventually got a chance at Discovery Zone when I was 8. There's no enemies to blast away, no true "attack", just a pretty offbeat and relaxing racing game. The commercials for the NES home port were really touting that arcade success and driving up the hype, so how does it live up? Well, kind of a mixed bag. 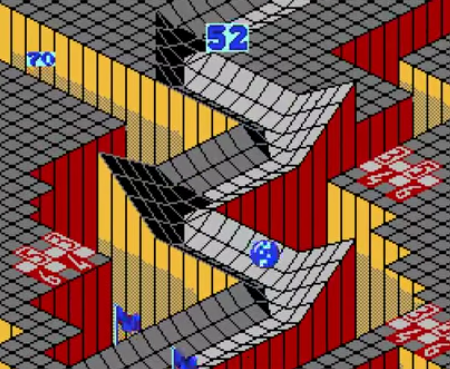 Marble Madness was created by game design legend Mark Cerny (works include Sonic the Hedgehog 2, Crash Bandicoot, and founded the Sega Technical Institute, the brand behind some of the Mega Drive's most popular games throughout the 90's) in 1984, with the Nintendo port being developed and released in 1989. And honestly, as a side-by-side comparison goes, it does bear a strong resemblance to the arcade, it does look pretty good.

I'm confident that many young video game fans were fascinated by anything that attempted something resembling a 3D perspective to some degree. The isometric view for Marble Madness provides a unique depth, similar to Snake Rattle & Roll, Zaxxon, and Cobra Triangle, something about Marble Madnesslooks really neat with the clever use of grey and black colored floor tiles to simulate proper angles. It does make navigation a little easier to decipher. Your protagonist is a blue marble, and the objective of Marble Madness is to guide it to the goal as fast and efficient as possible. By clearing each course at a good time, those seconds are allocated to the next stage. 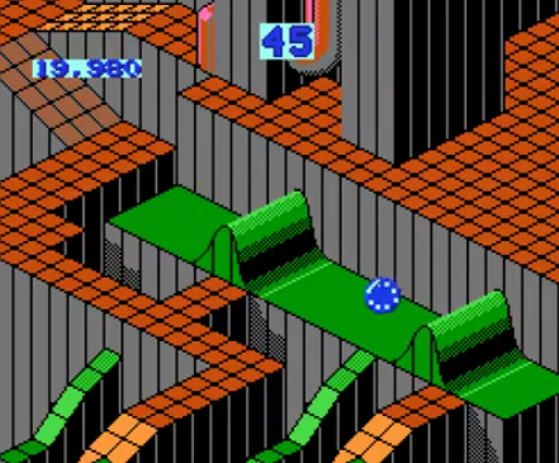 While the arcade version of Marble Madness utilized a trackball, allowing for more fluid movement, it goes without saying that it would have helped significantly if Nintendo or publisher Milton Bradley had manufactured a device that would compliment the game's control scheme. This is a long-handed way of saying Marble Madness on NES has some incredibly frustrating controls that are hampered severely on a directional pad. The game allows you to switch between 45 and 90 degree angles for the control scheme, and other than vaguely changing how sharp turns are, I can barely tell the difference as to what this affects. If you get this, feel free to let me know. 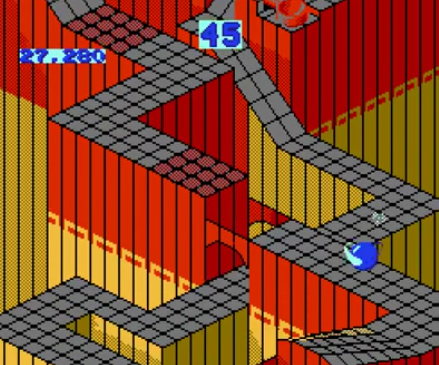 It's not impossible to get the hang of it, but it does make me want to take a tackhammer to my NES, because when I feel like I'm getting the hang of it, I find myself having to relearn how to get used to getting past an obstacle or regathering my bearings.

There's no life bar, per say, but you are controlling a glass marble, so similar physics apply. Fall from too great a height, you're going to shatter into pieces, losing precious time. Try propelling yourself too quickly, and you'll go careening off the course, burning away seconds off the clock. With proper timing, you CAN land and kinda stun your ball, but not break, so the science and strategy from the arcade applies. all of the same hazards are present, though the sound effects are nerfed. Still, it is pretty cool to hear many of the Marble Madness themes emitting from the NES.

This one remains strange, it is a pretty inferior port, but Marble Madness is also incredibly fun to pop in and strive to improve in it. I don't try speedrunning all that often, but this is a game I do try to get back into and kill some time. I have learned that using the NES Advantage stick makes controlling the marble a little easier, so if you happen to have one lying around, life gets less stressing when revisiting this.