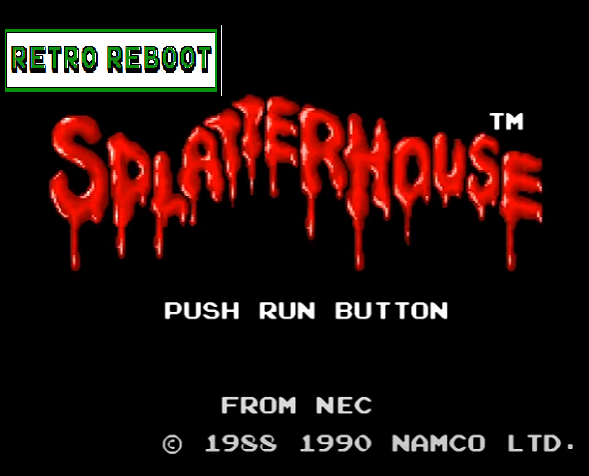 A game I never even had a chance to see in arcades, Splatterhouse is a franchise that established a controversial legacy for its unapologetic violence, leading to many of its home ports being censored a few years before Night Trap and Mortal Kombat sent the government explaining how vidja games are set to ruin a generation's brains. As mentioned, I didn't see it in arcades, and didn't get a chance to play a home version until we got a chance to burrow a TurboGrafx-16 in the early 90's. While there's little difference in its gameplay, it's the version I'm familiar with. 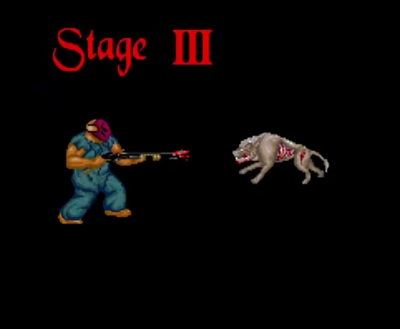 Developed by Namco in 1989, Splatterhouse quickly gained a cult following for its simplistic, yet satisfying play and homage to the horror/slasher genre. The protagonist Rick Taylor and his girlfriend Jennifer attempt to ride out a violent storm in a mansion known as "the Splatterhouse" for the wild rumors of the vicious experiments were conducted by parapsychologist Dr. West. The door slams shut, Jennifer screams, and she goes missing. Rick awakens in a dungeon and in possession of the Terror Mask, which transforms his body into a hulking physique and grants him great strength. With determination to rescue Jennifer. If you've played the console versions, you get ABSOLUTELY NONE OF THIS, as all the TG-16 version has is a silent shot of the mansion, zero text......and that's pretty much it. Pretty deflating, not that there's a tremendous amount of lore or anything, but the underdog story that Splatterhouse is makes up a lot of its charm. 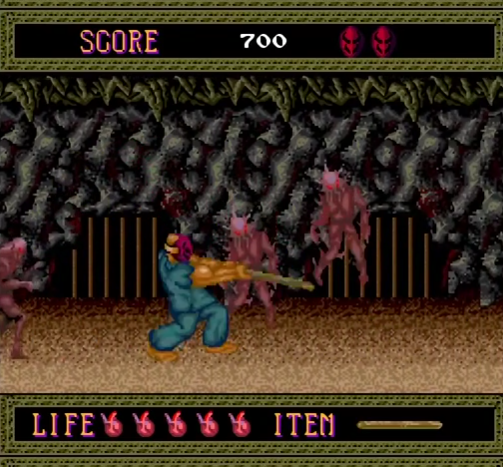 The TurboGrafx-16 version, as mentioned above, is very censored. The color of Rick's mask is altered and the color changed to less resemble the Jason Voorhees hockey mask. The weapon in the first two stages is no longer a meat cleaver, now a 2x4. Many of the more gross sound effects have been removed and smacking monsters around now sound more like throwing a wet ham sandwich against a refrigerator. If you don't mind the tone-down visuals, some altered graphics, and gratuitous violence, it visually hits a lot of the same beats as the arcade. 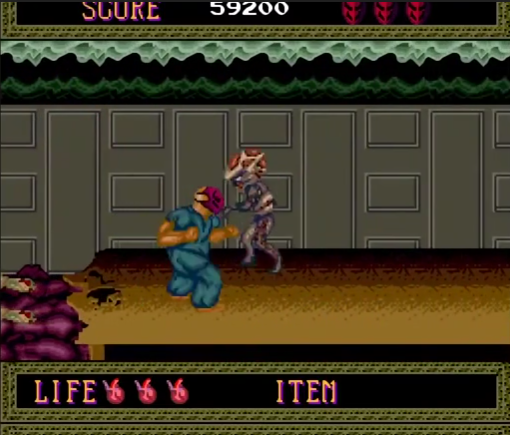 The controls are very basic, you move forward, you jump, and you hit things. Not really a whole lot to talk about when it comes to substantive mechanics and depth with Splatterhouse, it's very much like Altered Beast in that regard. I personally enjoy Splatterhouse more, something about picking up the various weapons in each stage gives it the levels a degree of uniqueness (a little funny that a meat cleaver has to be removed, but a shotgun is perfectly fine. I'll never understand where the line should be drawn). The boss fights are my favorite part of the game, especially Biggy Man. I wouldn't be shocked at all if a series like Silent Hill took inspiration from Splatterhouse when it came to designing their horrific monstrosities. 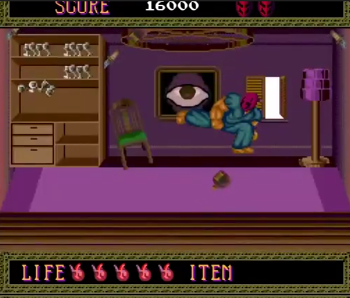 I enjoy the TurboGrafx-16 version, and while it isn't hard to find brawler beat 'em ups with more to offer in terms of gameplay, Splatterhouse's world is certainly an enjoyable ride, especially with the sequels. Yeah, the games all share a similar basic mode of arcadey play, but Rick is a character I like to pull for.