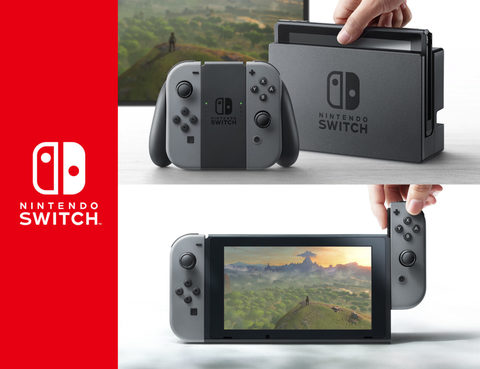 After watching this neat little contraption in pseudo action, I was instantly swept off my feet to the whimsical place I refer to as the PAST.

To summarize, the Nintendo Switch is meant to be played literally anywhere. Starting with playing the new Zelda, Mario, Mario Kart, Mario Party, Smash Bros., Splatoon, or any other game that we've played millions of times before at home, then getting a call from someone to meet somewhere. Well, obviously we don't want to sacrifice gaming time to live life, and what better way to show someone that they are entertaining than to bring your gaming system with you.

The controls on the sides are kinda neat, but it's just two small Wii controllers. The dock looks innovative, but it's just a tablet stand that has an HDMI output.

Unless the main tablet, which IS the touted "console", also allows for normal tablet functions, this is dumb.

Wanna Beta Test the Nintendo Switch? Just get your iPad or Galaxy, connect a MOBA controller, connect your tablet to your TV via HDMI or Apple TV, and then download the new Super Mario Run game.

There's the first Game Fix Life Hack for ya.

We'll talk more about it on the next Podcast, and if you have something to say or argue about do it in the comments!