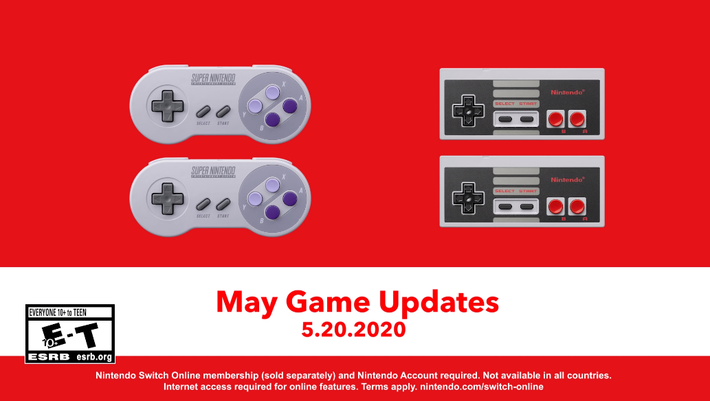 Nintendo's last Switch Online Update came in February with virtually no statement about what had caused a several month delay. After radio silence, some games were announced for the streaming service that will be available May 20th.

Wild Guns – The Kid gang and their army of robots have taken over! Blast your way through villainous outlaws, diabolical robots and towering, screen-filling bosses. Fortunately, you’ve got plenty of moves to help you survive the firepower headed your way. You’ll need a sharp eye and quick-on-the-draw reflexes to survive on your own. Or team up with a friend and go out blazing in two-player co-op.

Panel de Pon (Tetris Attack) – As the stack of puzzle pieces rises, think fast to match panels and set off cascading chain reactions and combos. You’ll have to make strategic choices quickly to counteract the relentless competitor attacks from above. A selection of single-player and two-player modes and options provides escalating action and zippy fun. This title originally launched for the Super Famicom in 1995, but this is the first time this version of the game will be available in the U.S.

Operation Logic Bomb – Agent Logan, who has been fitted with bio-electronic implants that grant him superior strength, reflexes and analytical abilities, has been charged with a mission to save the Subspace Particle Transfer Project. It’s up to him to infiltrate, neutralize the intruders and rescue the scientists in a top-down shooter with giant bosses and frenzied action that doesn’t let up.

Rygar – An old legend proclaimed, “When the peaceful land is covered with evil spirits, a brave soldier will be brought to life from the dead.” Luckily, Rygar, the mythical hero from Argus, has arrived in order to defeat the evil king Ligar and his army of dangerous beasts. Join forces with Rygar for a hybrid action-adventure game with a distinct blend of platforming and role-playing elements!