Yeah, I hate Dragonball GT immensely. Even though I don’t even care for DBZ at all anymore, I won’t pretend that I never enjoyed it up to a certain point (the Cell story arc demolished it all for me. Keep posted, that rant is coming…). Grand Tour, however, takes what many fans liked about both (the adventure aspect of Dragonball and the high octane action of Z) and butchers it with all the subtly of euthanizing a sick dog with a chainsaw. 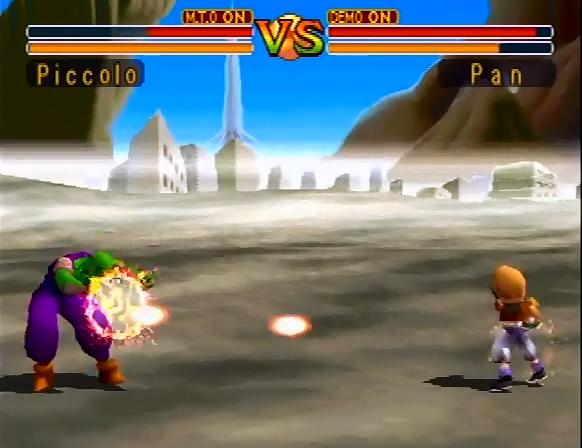 From what I’ve played, these early Dragonball Z fighting games on the Super Famicom aren’t very good, but have a distinct charm about them that kept me playing for a short while. Final Bout is the only game bearing the GT logo, and when I turned it on, the original anime intro looks promising.

It goes downhill from there. Fast!!

The character models are passable for 1997 standards, but considering by this point two Tekken games had existed on the same console and saw graphical enhancements with each entry. This is produced by Bandai…wait….To a degree, they captured the character’s likeness on the models well enough, slightly putting it above the decals on Lego faces. At the very least, they nailed backgrounds down to perfection! Since 99.6% of Dragonball fights take place in desolate wastelands, it probably wasn’t hard for Bandai to rally together a couple of fourth graders to slap together some barely garish watercolors to render into a “3D environment” You could argue that it looks good, but much like the show, it’s like sensory deprivation! There’s only a given amount of time that I can tolerate looking at the same shades of pee-colored yellow-green and blue looming the damn horizon before I’m frothing at the mouth, begging for a fight scene to take place in the middle of a metropolis.

I assume that since FUNimation decided to go out of their way and reprint the game with their logo on it, I that they would get the voice actors of the more modern run to reprise their roles and redub English voices. They didn't, which is fine with me. I don't care for Funimation's staff or their voice work, so the crew assembled here, which does feature veteran VAs Steve Blum, Skip Stellrecht, and Lex Lang. I collected some of the best examples of the amazing dub work done here for the pre-battle sequences.

Talking controls. They don’t work. Simple. These are some of the most busted, unresponsive controls I’ve ever played on a PlayStation fighting game. This is like the video game equivalent of choreographing a fight between your G.I. Joes. The only difference is that you can make your toys do what you want them to. Press a button, and a half a second later, Gohan throws a punch. Leap behind your opponent and you can bake a ham in the time it takes for them to maneuver around and face each other. try and have one of DBZ’s patented midair clashes and squeeze the controller into a fine powder as you struggle to even get on the same plane just to HIT them! Take your pick from the many “special moves” that either don’t work at all or work too well. 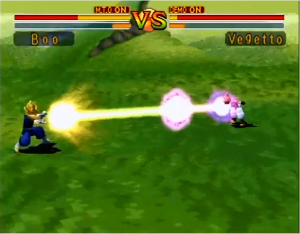 Even after thoroughly reading the manual and trying to digest this information to utilize it properly, I still cant get certain things to work! More often than not, if you launch a Kamehameha, the CPU will COUNTER with a blast of his own. When this happens to you for the first time, you’re not sure what to do, so you mash buttons until his beam hits you and you look like a jackass. Well, when the word COUNTER appears, that’s an opening for you to try and retaliate with a blast of your own or defend. Even after practicing and getting the timing down, I can’t counter it. I just get hit, over and over. Even during the energy clash, they don’t tell you that rapidly hitting Triangle can return the fire. Well, unless your fingers are powered by nitrous oxide and you have the reflexes of a hummingbird, you’re gonna get blasted every time. 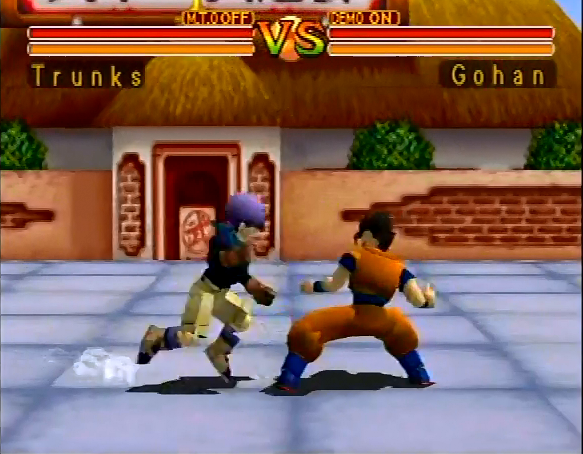 Despite being a Dragonball GT based fighter, the only playable character exclusive to said series is Pan. No Blackstar Dragons, General Rildo, or Super 17? No Uub, the only cool thing about GT, and he couldn’t make the cut? I’m not counting Trunks or Super Saiyan 4 Goku, they’re merely palette swaps of already established Z characters. Speaking of palette swaps… 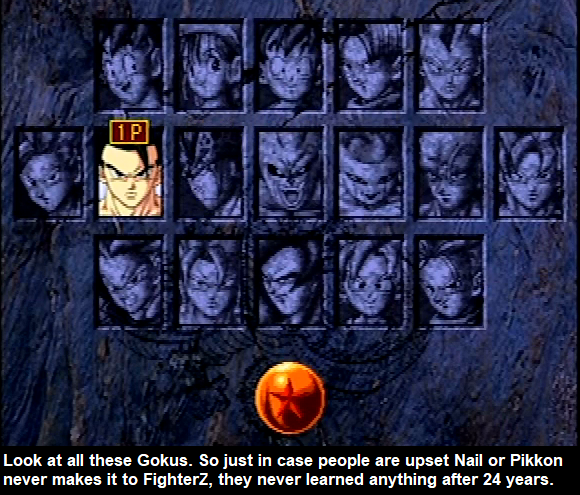 This game sucks something fierce. I would rather play War Gods or Pit Fighter. It’s ugly as all hell, you would have an easier time getting a kite to fly in the direction you want it to go during a hurricane, the audio is downright terrible that someone should be legally arrested for it. None of the modes provide any kind of enjoyment on any conceivable level. This game is something that does nothing right. It might be a worse PlayStation fighter than Star Wars: Masters of the Teras Kasi. Fortunately, DBZ fans get much better games a generation later, but was the dark ages. But not Mace: The Dark Age on Nintendo 64. That's a different kind of crap.