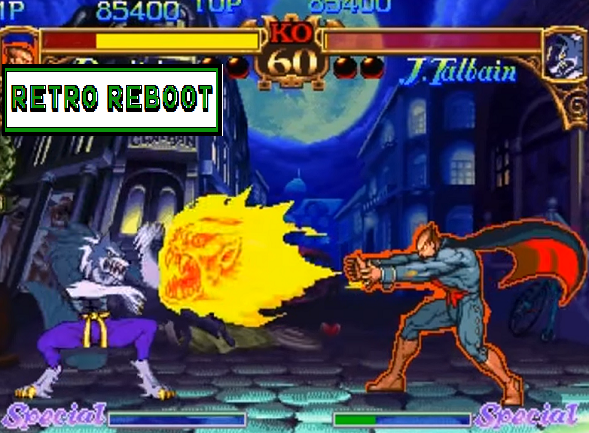 If you were to make a list about what franchise qualifies as Capcom's most beloved series, it'd be hard to find one more beloved than Darkstalkers. Street Fighter has been the backbone of the fighting game genre for literal decades, Resident Evil is the standard bearer for the survival horror franchise, Monster Hunter is a cash-generating machine, and Ace Attorney's lore and characters remain pretty influential to this day. As for Darkstalkers, it has never been for a lack of quality. It's tough to muscle any ground in a period when Capcom was producing fighting games per minute. 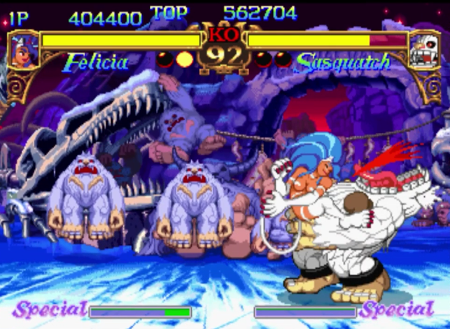 I remember the first time I laid eyes on Darkstalkers. It was on a school trip in 1996 to Washington DC. The hotel we stayed at was a Comfort Inn, and the lobby had several arcade machines; the Simpsons arcade game, NBA Hangtime, and Darkstalkers. I gravitated towards this game immediately. Outside of that very signature Capcom style, I loved seeing a fighting game that featured all of my favorite horror movie monsters as I asked myself, "WHERE HAS THIS BEEN ALL MY LIFE!?" Needless to say, I spent tons of money, as often as I can during this trip, pumping quarters into this game.

Developed for arcades in 1994, Darkstalkers was ported to the PlayStation by Psygnosis in 1996. Because we had the Sega Saturn, I wouldn't get a home version of Darkstalkers until its sequel, Night Warriors: Darkstalkers Revenge, was released on the Saturn a year later. Powered by Capcom's CP System II, Darkstalkers sports some of the more unique and detailed 2D sprites, it's no surprise the company got so much use out of this game engine. Darkstalkers' monster bash was initially going to use the traditional Hammer and Universal monsters, but they weren't able to obtain the rights. Capcom producer Alex Jimenez came up with the idea of creating their own characters. The roster is made up of iconic creatures of fiction, folklore, and superstition from seemingly all eras of culture; Dimitri Maximoff (the vampire), Victor Von Gerdenheim (Frankenstein's monster), Jon Talbain (werewolf), Bishamon (cursed Samurai), Sasquatch (the Yeti), Morrigan Aensland (succubus), Rikuo (the Creature from the Black Lagoon), Felicia (catwoman), Lord Raptor (zombie), and Anakaris (Mummy) makes up the playable characters. Huitzil, an Aztecan robot, and Pyron, an alien demon, serve as the boss characters for the game. 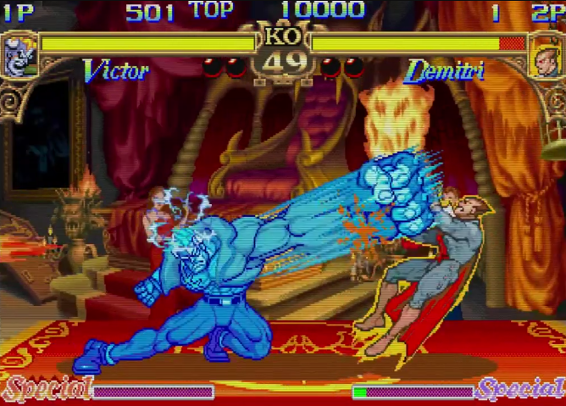 The graphics, as mentioned, are very well done, and the PlayStation port does a pretty job emulating the arcade's detail. One of Darkstalker's greatest traits has always been the high level of animation it boasts, and that's been one of the reasons why I have theorized the series has been dormant for so long. The hand-drawn sprites are incredibly eye-catching and each character has so many frames, there's no telling how much time was spent on this.

Everyone has different reactions to different attacks. Unlike Street Fighter II, when all the fighters were immolated by Dhalsim's Yoga Flame, they all looked the same. In Darkstalkers, burning a character or getting sliced by Bishamon's sword. Hell, Lord Raptor's walking animation alone. It's very fluid, and only a little bit of slowdown from the PlayStation version, along with the long load times. 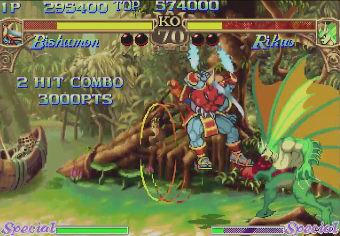 The controls have some similarities to the Street Fighter games, with a number of additions that would become staples in the Street Fighter series. While Darkstalkers didn't coin EX attacks (powered up versions of specials), but before true Super Arts made their way to the series, the Special meter in Darkstalkers gave access to enhanced attacks that had a limited use. It drains if you do not use it.

The chain combo system feels very similar to Super Street Fighter II Turbo, with some different timing. It's easy to pick up and play, and all of the characters have pretty unique skills. Rikuo ,for instance, has charge attacks like Guile. He's not necessarily a zone character, as his two different projectiles are for stunning opponents. Morrigan and Dimitri are the closest thing Darkstalkers has to Shoto style fighters (characters that play similar to Ken, Ryu, Akuma, etc.), but with enough traits to call their own.

I have a hard time recommending the very first Darkstalkers, as each sequel are significantly better games. As a starting place, the first one establishes some fascinating lore that really does deserve more fleshing out. It's a fun game to play, perhaps a little basic, compared to the aforementioned improvements of the following games. But unlike last week's Golden Axe: The Duel, this is a 90's fighter that holds up much better.