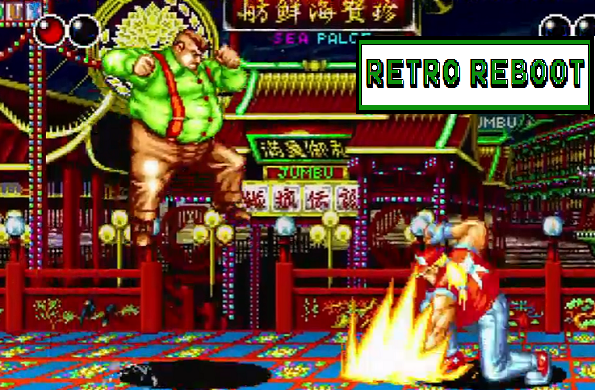 One of those topics I constantly harp about, especially when it comes to not only retro video games, but fighting games in particular, is the Fatal Fury franchise meant a great deal to me. The first one wasn't perfect, but was solid enough to stand apart from Street Fighter II with its own appeal. In 1992, a sequel would be developed, and it enriches the lore of the Hungry Wolves and the tales of South Town. 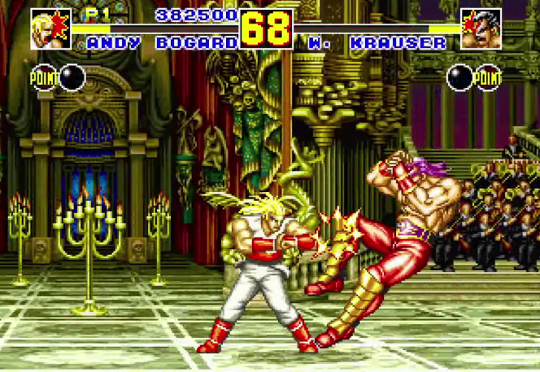 Hitting the Neo Geo in 1992, Fatal Fury 2 would see various home ports on the SNES, Mega Drive, PC Engine, even hitting the Game Boy. After the defeat and death of Geese Howard at the end of the previous King of Fighters tournament, a new benefactor by the name of Wolfgang Krauser, a German-born nobleman who is also a very ruthless and dangerous fighter trained in  the arts of Stroheim. Krauser is Geese's half-brother, and partakes in this endeavor to lure Terry, Andy, and Joe in order to avenge him. Some of Krauser's Stroheim fighting techniques would be later used (*cough*stolen*cough*) by Rugal Bernstein in the King of Fighters series. 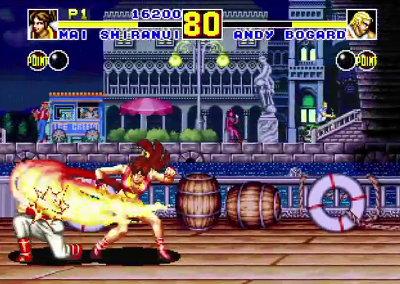 Along with the new big bad (who's one of my favorite fighting game villains) comes a larger roster of characters to Fatal Fury 2. The Brothers Bogard, Terry and Andy, are joined again by their good friend Joe Higashi. Along with them would be two SNK mainstays in subsequent KOF games Kim Kaphwan and Mai Shiranui, the latter would become one of SNK's most recognizable characters and along with Terry, Kyo, and Athena Asamiya, be a spokesperson for the brand in the porceeding decades. Mai, Fatal Fury's first female character, is also the first video game lady (to my knowledge) to be given "jiggle" physics, and that's funny ass trivia. Big Bear, the former Raiden, returns as his babyface persona unmasked and abandons his more cheat-tastic moves and fights like a fan favorite.

Jubei Yamada, a friend of Mai's grandfather, Hanzo. Cheng Sinzan, a very round archeologist, and a character design I really like. Cheng is probably my favorite fat dude in a fighting game. Unlike Bob in Tekken and Street Fighter IV's Rufus, he really isn't treated as a joke or parody. Rounding out the new fighters is Axel Hawk, a hulking Butterbean-looking boxer who replaces the somehow more generic Michael Max as a midboss, and Laurence Blood, a vicious bullfighter/warrior.

Just as a minor thing I miss, The Fatal Fury games, and some Samurai Shodown entries had the character sprites lined up amongst themselves in a row to select from. It was so cool, that's something you don't see anymore. 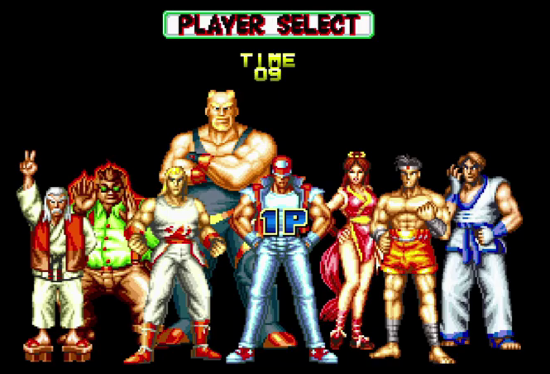 The gameplay is expanded upon, now properly incorporating the Neo Geo's four button layout. The light punch and kick now act as a means to roll and switch between plains when pressed simultaneously. Yup, two-lane battle is back, much to the chagrin of players. I still kinda like it, even if its prospects as a viable mechanic were ambiguous at the time. 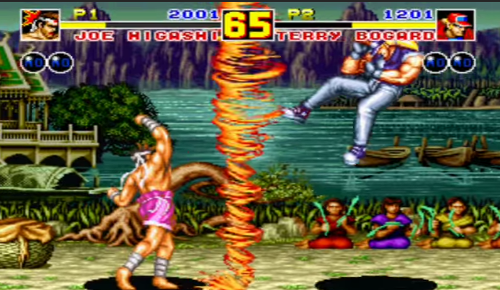 Fatal Fury 2 still trails behind Street Fighter II, but the improvements over the first game are very clear. Combos and chains feel more responsive, special moves are easier to execute (though a touch of some of that SNK feel can be a little obtuse), fundamentals like anti-airs are more precise. The introduction of Desperation Moves, which can be executed when your life bar is flashing red, adds strong implications. Probably the original comeback mechanic, they dealt a tremendous amount of damage, but were difficult to execute under duress. Thanks to SNK, many blisters ended up on the thumbs because I needed to pull off a Power Geyser or Screw Upper to fashionably finish off a fight. One frame links? 90's Desperation Moves separated the adults from children. 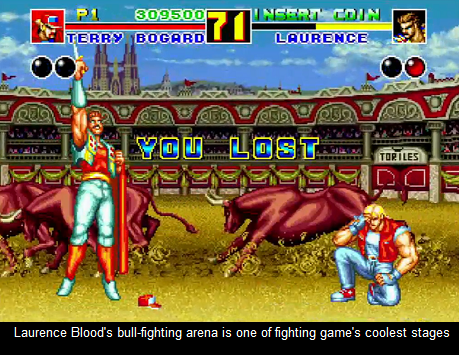 With better graphics and more expressive sprites, Fatal Fury 2 was one of the better looking fighters of the blossoming era of the genre. Like the previous game, I was a big fan of the day-to-night transitions with succeeding rounds. Some stages could also act as a hazard for the two-line battle. Laurence Blood's bulls could whack you into the foreground when thrown into them, for added pain. 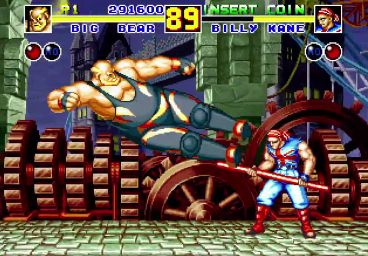 Same with the clock tower gears in Billy Kane's stage. SNK also coined wall damage, how about that? The character profile pics in the upper corner of the screen showed battle damage. Small, but a touch that was unique.

Fatal Fury 2 beefs up the ante of the first game, and many of SNK's philosophy that would later be featured in the King of Fighters series began with this game, from signature characters to mechanics. It's easy to revisit, and can be pretty fun to play, but realistically the vanilla version of this game is rendered irrelevant with the release of Fatal Fury Special, an update with mechanic tweaks and roster additions, not too much longer later.