Hasbro & Nintendo Team-Up For Another Board Game 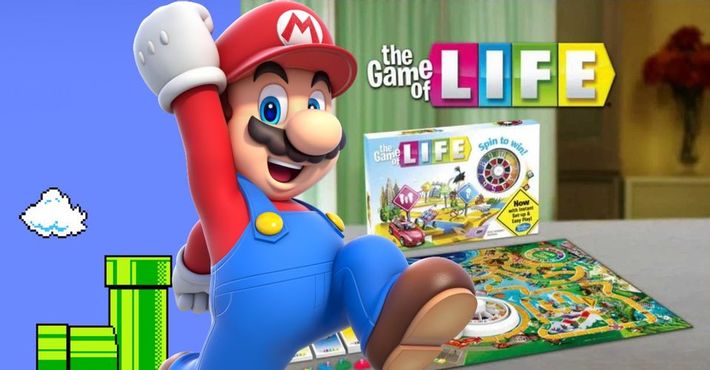 Well, the team-ups are continuing, but not with Monopoly. This time it's tackling The Game of Life.

The Game of Life: Super Mario Edition is already out in select retailers, Amazon & Target - which at the time of this writing. Has already been sold out. Let's hope they produce a second wave.

Here is the game description.

INSPIRED BY SUPER MARIO: It's The Game of Life board game with an exciting twist featuring Super Mario video game-inspired characters, artwork, and gameplay

MOVE THROUGH THE MUSHROOM KINGDOM: Players move around the gameboard as Mario, Luigi, Peach, or Yoshi. They choose their path and which areas to explore as they go through the Mushroom Kingdom

BATTLE BOWSER: Unlike classic The Game of Life board game, this edition isn't about money or retirement. The ultimate goal in this board game for kids is to defeat Bowser

MINIGAMES AND STARS: Use coins to buy stars for a boost in the battle against Bowser. Compete in fun minigames in a face-off for prizes, and power up with Items and Companions

FUN FAMILY GAME: The Game of Life: Super Mario Edition board game is a great choice for game night with the family, and it's a fun indoor game for kids ages 8 and up, for 2-4 players

That seems fun as heck to me. I hope I can get my hands on one.

Those mini's look cool also. I am a sucker for minis.

Good luck to everybody who is going to search for one. I will also be searching around for a copy.

This has been James with Game Fix Show. Game on everybody!